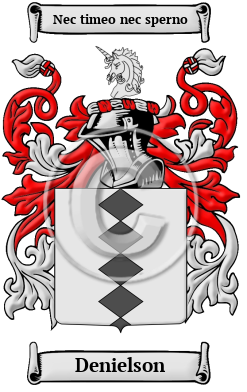 One of the most common classes of Scottish surnames is the patronymic surname, which arose out of the vernacular and religious naming traditions. The vernacular or regional naming tradition is the oldest and most pervasive type of patronymic surname. According to this custom, names were originally composed of vocabulary elements from the local language. Patronymic surnames of this type were usually derived from the personal name of the original bearer's father. The surname Denielson is derived from the ancient name Daniel, which means God has judged. [1]

Early Origins of the Denielson family

The surname Denielson was first found in Gloucestershire where Alicia Daniel was one of the first records of the name was found temp. Henry III to Edward I. Simon Danyel was later found in Somerset. [2] "The church [of Beckingon, Somerset] contains the remains of Samuel Daniel, poet-laureate and historian, who died here in 1619." [3]

Early History of the Denielson family

Scottish surnames are distinguished by a multitude of spelling variations because, over the centuries, the names were frequently translated into and from Gaelic. Furthermore, the spelling of surnames was rarely consistent because medieval scribes and church officials recorded names as they sounded, rather than adhering to any specific spelling rules. The different versions of a surname, such as the inclusion of the patronymic prefix "Mac", frequently indicated a religious or Clan affiliation or even a division of the family. Moreover, a large number of foreign names were brought into Scotland, accelerating accentuating the alterations to various surnames. The name Denielson has also been spelled Daniels, Daniell, Daneil, Danyell, Danel, Daniers, Danyei and many more.

Notable among the family at this time was John Daniel, a 17th century musician, born in Somerset, England; Samuel Daniel (1562-1619), an English poet and historian famous for his sonnets; Jeffrey Daniel (1626-1681), an English politician, Member of Parliament for Marlborough (1660); John Daniel, (fl. 1681), an English...
Another 47 words (3 lines of text) are included under the topic Early Denielson Notables in all our PDF Extended History products and printed products wherever possible.

Migration of the Denielson family