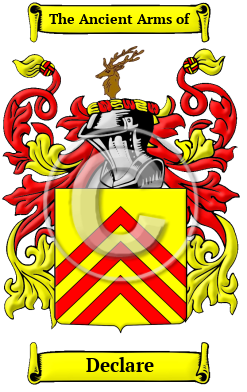 The name Declare reached England in the great wave of migration following the Norman Conquest of 1066. The Declare family lived in Suffolk. The family was originally from Clere, in Vexin, Normandy. The family de Clare were Norman lords who were descended from Richard fitz Gilbert, who accompanied William the Conqueror into England during the Norman Conquest. The family received huge estates including Clare, now a small town Suffolk; and Tonbridge, now a market town in Kent for their efforts. [1]

The parish of St. Cleer in Cornwall is an important location for the family. "The name of this parish is derived from a celebrated female saint called Clare, to whom the church is dedicated, and who is presumed to be its tutelar guardian. She was born of an honourable family in Italy, and having rendered herself famous for the austerity of her manners, she set up a college of virgins, which, after her name were called the order of the Poor Clares of St. Benedict, under the solemn vows of obedience, poverty, and chastity, according to the rule of St. Francis. St. Clare died in the year 1252, aged 70. Now by the death of St. Clare, St. Francis, and St. Benedict, says Hals, may be nearly computed the ages of those churches dedicated to them, and bearing their names in this county. From this parish was denominated an ancient family of gentlemen surnamed De St. Cleare, from whence are descended the St. Cleares of Tudwell, in Devonshire." [2]

Early Origins of the Declare family

The surname Declare was first found in Suffolk where "Richard de Clare (d. 1090) held no less than ninety-five lordships in Suffolk, all attached to his chief lordship of Clare in the same county. To this family we owe the name of an English town, an Irish county, royal dukedom (Clarence), and Cambridge college." [3]

Richard fitz Gilbert (d. 1114) was referred to as "Richard of Clare" in the Suffolk return of the Domesday Survey.

By the time of the Hundredorum Rolls of 1273, a branch of the family was found in Cambridgeshire as that rolls listed Alan filius Clare as holding lands there at that time. The same rolls also listed: Bogo de Clare in Oxfordshire; Gilbert de Clare in Bedfordshire; Richard de Clara in Somerset; Thomas de Clare in Lincolnshire; and William de Clare in Norfolk. [3]

In 1379, the Yorkshire Poll Tax Rolls was complied and it listed the name as both a surname and a forename: Isabella Clare; Clara Dey; and Clare Schepard. [3]

Another source confirms the wide migration of the family by the 13th century: "Clare is an ancient Oxfordshire name. In feudal times the De Clares were a very powerful family in southern England. In the 13th century the name of De Clare or De Clar' was established in Oxfordshire, Norfolk, Suffolk, Somerset." [4]

Some of the family were found at Waldingham in Surrey in ancient times. "This place appears to be mentioned in Domesday Book under the appellation of Wallingham; it was held at the time of the survey under Richard de Clare, and lands here were possessed by the Clares for some time subsequently." [5] And another branch was found at Yeddingham in the East Riding of Yorkshire. "In 1163, Roger and Helwysia de Clere founded a priory here for nine nuns of the Benedictine order, dedicated to the Virgin Mary." [5]

Early History of the Declare family

Before the advent of the printing press and the first dictionaries, the English language was not standardized. Sound was what guided spelling in the Middle Ages, so one person's name was often recorded under several variations during a single lifetime. Spelling variations were common, even among the names of the most literate people. Known variations of the Declare family name include Clair, Clare, Clere, O'Clear, O'Clair and others.

Migration of the Declare family to Ireland

Some of the Declare family moved to Ireland, but this topic is not covered in this excerpt.
Another 73 words (5 lines of text) about their life in Ireland is included in all our PDF Extended History products and printed products wherever possible.

Migration of the Declare family

To escape the political and religious chaos of this era, thousands of English families began to migrate to the New World in search of land and freedom from religious and political persecution. The passage was expensive and the ships were dark, crowded, and unsafe; however, those who made the voyage safely were encountered opportunities that were not available to them in their homeland. Many of the families that reached the New World at this time went on to make important contributions to the emerging nations of the United States and Canada. Research into various historical records has revealed some of first members of the Declare family to immigrate North America: Nicholas Clare who settled in Barbados in 1678 with his wife and son; John Clare settled in Virginia in 1651; another John settled in Pennsylvania in 1682.