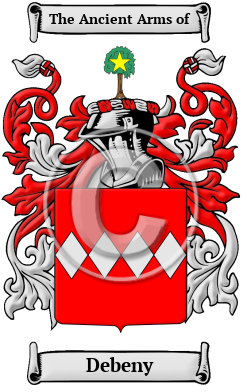 The name Debeny reached England in the great wave of migration following the Norman Conquest of 1066. The Debeny family lived in Leicestershire. The family was originally from Abene, where they held a castle, near Louvaine, Normandy, and it is from the local form of that name, D'Abene which means from Abene, that their name derives. Another important English house of the same name comes from Aubigny, Brittany. Their name is of identical local derivation. [1]

Early Origins of the Debeny family

The surname Debeny was first found in Leicestershire at Belvoir, a village and civil parish in the Melton district. Belvoir literally means "beautiful view" derived from the Old French words bel + vedeir. [2]

Another source is more specific: "Amongst the most distinguished companions in arms of the Conqueror was Robert de Todeni, a nobleman of Normandy, upon whom the victorious monarch conferred, with numerous other grants, an estate in the county of Lincoln upon the borders of Leicestershire. Here De Todeni erected a stately castle, and from the fair view it commanded, gave it the designation of Belvoir Castle, and here he established his chief abode. He died in 1088, and was succeeded by his eldest son William, who assumed the surname of Albini or Aubeney, and acquired great renown at the celebrated Battle of Tenercheby, in Normandy, where, commanding the horse, he charged the enemy with so much spirit that he determined at once the fate of the day. " [3]

It was here that William d'Aubigny (Brito) (d. after 1148), was an itinerant justice under King Henry I of England and was granted the lands where he built Belvoir Castle, which is now a restored stately home. He fought at the Battle of Tinchebray (1106) and was in favor of King Henry I. His grandson, William d'Aubigny or D'Aubeney or d'Albini, Lord of Belvoir (died 1236) was High Sheriff of Warwickshire and Leicester and High Sheriff of Bedfordshire and Buckinghamshire in 1199. [1]

Wymondham or Windham in Norfolk was an early family seat. "This town derives its name from the Saxon Win Munde Ham, signifying 'a pleasant village on a mount;' and is indebted for its importance to the foundation of a priory of Black monks, at first a cell to the abbey of St. Alban's, by William d'Albini or Daubeny, in 1130." [4]

To the south in the parish of Lanteglos, Cornwall, "the manor of Polruan belonged to the Daubeny family, to whose interest it was indebted for its market, from the year 1291 to 1420; after which it passed to the Molins, and was then inherited by Lord Hungerford." [5]

Early History of the Debeny family

Before the advent of the printing press and the first dictionaries, the English language was not standardized. Sound was what guided spelling in the Middle Ages, so one person's name was often recorded under several variations during a single lifetime. Spelling variations were common, even among the names of the most literate people. Known variations of the Debeny family name include Daubeney, Daveney, Dabney, Daubeny, Debney, Dalbini, Dibney, Dybney, Dobney, Daughby, Dawbeney, Dawby and many more.

Outstanding amongst the family at this time was Giles Daubeny or Daubeney, 1st Baron Daubeney KG (1451-1507), an English soldier, diplomat, courtier and politician. He was "descended from the ancient Norman family of de Albini, whose ancestor Robert de Todeni came to England with the Conqueror and built Belvoir Castle...
Another 49 words (4 lines of text) are included under the topic Early Debeny Notables in all our PDF Extended History products and printed products wherever possible.

Migration of the Debeny family

To escape the political and religious chaos of this era, thousands of English families began to migrate to the New World in search of land and freedom from religious and political persecution. The passage was expensive and the ships were dark, crowded, and unsafe; however, those who made the voyage safely were encountered opportunities that were not available to them in their homeland. Many of the families that reached the New World at this time went on to make important contributions to the emerging nations of the United States and Canada. Research into various historical records has revealed some of first members of the Debeny family to immigrate North America: Thomas Dabney who settled in Barbados in 1654; John Dabney arrived in New York in 1820; Darby Davenney settled in Philadelphia in 1858; Alexander D'Aubiney settled in New England in 1775.