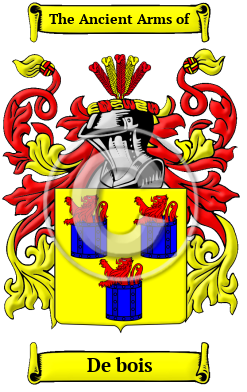 Boisseau, which comes from the name Boissard, was originally a name given to a person that worked as a merchant and it was also used as a nickname for "un homme trapu", or in English, a "stocky man". [1]

The surname De bois was first found in Normandy (French: Normandie), the former Duchy of Normandy, where the family held a family seat at the village of Beauce in the arrondisement of Blois. One source claims that the name Boisseau was seen with a noble family from Saintonge, a former French province on the central-west coast of France, that settled on the French owned Caribbean island of Martinique and maintained nobility in 1698. [2]

This web page shows only a small excerpt of our De bois research. Another 61 words (4 lines of text) covering the years 1479, 1523, 1694, 1758 and 1754 are included under the topic Early De bois History in all our PDF Extended History products and printed products wherever possible.

Another 45 words (3 lines of text) are included under the topic Early De bois Notables in all our PDF Extended History products and printed products wherever possible.

De bois Settlers in United States in the 19th Century