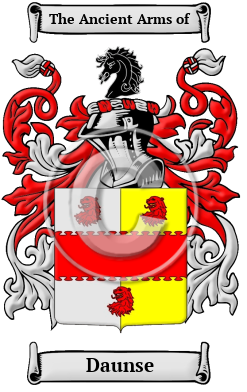 The Daunse family is linked to the ancient Anglo-Saxon culture of Britain. Their name comes from the baptismal name for the "son of Daniel," or it could have been from the Anglo-Saxon word Dense, meaning Danish. [1]

Early Origins of the Daunse family

The surname Daunse was first found in Yorkshire where the Yorkshire Poll Tax Rolls of 1379 list some of the first entries of the family: Amicia Daunce; Thomas Danse; and Willelmus Daunse. [2]

In Bedfordshire, early records there show William Daunce in the Assize Rolls of 1247. Robert Daunce qppears in the Subsidy Rolls for Yorkshire in 1301 and Robert del la Daunce was listed in 1305 and "was probably a professional dancer, chief of ‘a dancing party’, a meaning recorded c. 1385." [3]

Early History of the Daunse family

Sound was what guided spelling in the essentially pre-literate Middle Ages, so one person's name was often recorded under several variations during a single lifetime. Also, before the advent of the printing press and the first dictionaries, the English language was not standardized. Therefore, spelling variations were common, even among the names of the most literate people. Known variations of the Daunse family name include Dance, Danse and others.

Notables of this surname at this time include: George Dance the Elder (1700-1768), English architect and surveyor to the corporation of London. He designed the Mansion House and many of the churches and public buildings of the city during the earlier half of the eighteenth century. One of his sons, George Dance the Younger (1741-1825), was also an architect of note. He was the fifth and youngest son of George Dance the Elder. He "learnt his profession in his father's office. He spent also some time in France and Italy, and studied in Rome. He was a member of the Incorporated...
Another 135 words (10 lines of text) are included under the topic Early Daunse Notables in all our PDF Extended History products and printed products wherever possible.

Migration of the Daunse family to Ireland

Some of the Daunse family moved to Ireland, but this topic is not covered in this excerpt. More information about their life in Ireland is included in all our PDF Extended History products and printed products wherever possible.

Migration of the Daunse family

For political, religious, and economic reasons, thousands of English families boarded ships for Ireland, the Canadas, the America colonies, and many of smaller tropical colonies in the hope of finding better lives abroad. Although the passage on the cramped, dank ships caused many to arrive in the New World diseased and starving, those families that survived the trip often went on to make valuable contributions to those new societies to which they arrived. Early immigrants bearing the Daunse surname or a spelling variation of the name include: Gilbert Dance who settled in New Orleans in 1822; John Dance arrived in Philadelphia in 1754; Rebecca Dance settled in Virginia in 1729.