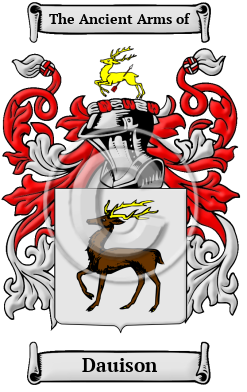 The Dauison surname is a patronymic created from the personal name David.

Early Origins of the Dauison family

The surname Dauison was first found in Perth, Scotland, where, in 1219, Johnannes filius Davidis, a merchant in Perth, is mentioned. Some accounts suggest that around 1000 AD the Catti (Chattan) Clan, from whom the Davidson Clan descends, broke into two distinct factions, the MacKintosh and the MacPherson clans.

Bearers of Dauison were found on both sides of the Scottish-English border. The first estates of the Clan Dauison were at Invernahaven, a small estate in Badenoch, where they were said to be found from the mid 14th century.

Early History of the Dauison family

Notable amongst bearers of this family name during their early history was Sir Robert Davidson, Chief of the Clan Davidson, who was killed at the Battle of Harlaw, in 1411. William Davison (1541?-1608), was "Secretary of Queen Elizabeth, was, according to his own account, of Scottish descent. In June 1566 he went to Scotland as secretary to Henry Killegrew, the English ambassador, and congratulated Mary of Scotland on the birth of her son James. According to Sir James Melvill, he described himself at that early date as 'a favourer of the king's right and title to the crown of...
Another 97 words (7 lines of text) are included under the topic Early Dauison Notables in all our PDF Extended History products and printed products wherever possible.

Migration of the Dauison family to Ireland

Some of the Dauison family moved to Ireland, but this topic is not covered in this excerpt.
Another 80 words (6 lines of text) about their life in Ireland is included in all our PDF Extended History products and printed products wherever possible.

Dauison migration to the United States +

Dauison Settlers in United States in the 17th Century