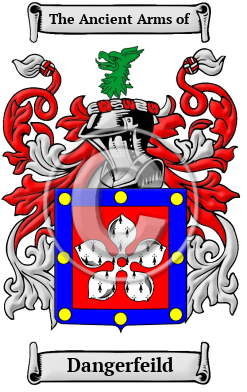 Early Origins of the Dangerfeild family

The surname Dangerfeild was first found in Dorset where they held a family seat as Lords of the Manor. The name "is from 'D'Angerville.' Five places in Normandy still bear the name of Angerville [1]. I see no reason to doubt this derivation. The French terminative 'ville' occasionally becomes -field in English nomenclature" [2]

Another source confirms that they were from Angerville in Contentin in Normandy, one of the oldest Norman noble families. [3]

Early History of the Dangerfeild family

This web page shows only a small excerpt of our Dangerfeild research. Another 109 words (8 lines of text) covering the years 1200, 1230, 1336, 1650, 1685, 1650 and 1675 are included under the topic Early Dangerfeild History in all our PDF Extended History products and printed products wherever possible.

Spelling variations of this family name include: Dangerfield, Daingerfield, a'Angerville, d'Angerfield and many more.

Outstanding amongst the family at this time was the infamous Thomas Dangerfield (ca. 1650-1685), an English conspirator, one of the principal informers in the Popish Plot. He was ", born at Waltham in Essex about 1650, was son of a farmer of Cromwellian tenets. Dangerfield began life by robbing his father of horses and money, fled to Scotland, returned as a repentant prodigal and was forgiven, but soon ran away to the continent, and rambled through Portugal and...
Another 77 words (6 lines of text) are included under the topic Early Dangerfeild Notables in all our PDF Extended History products and printed products wherever possible.

Dangerfeild migration to the United States +

Dangerfeild Settlers in United States in the 17th Century