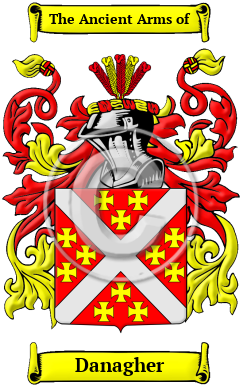 Early Origins of the Danagher family

The surname Danagher was first found in Cork (Irish: Corcaigh) the ancient Kingdom of Deis Muin (Desmond), located on the southwest coast of Ireland in the province of Munster, and Kerry where they held a family seat. The first recorded instance of the name is of Donall O'Denaghie of Cloghlea, County Cork, a vestarius (keeper of the vestry) in 1585. According to Irish lore, bearers of this name were traditionally descended from Maoin, brother of Muircaertach Mor MacEarca, King of Ireland. Many Irish sept (clann) names were intermixed and family groupings became almost indistinguishable. Bearers of this name often changed Danagher to Dennehy, and Dennehy to Denny.

Early History of the Danagher family

This web page shows only a small excerpt of our Danagher research. Another 74 words (5 lines of text) covering the years 1828, 1829, and 1865 are included under the topic Early Danagher History in all our PDF Extended History products and printed products wherever possible.

Spelling variations of this family name include: Dennehy, Denehy, O'Dennehy, O'Denehy, Denesy and many more.

Another 50 words (4 lines of text) are included under the topic Early Danagher Notables in all our PDF Extended History products and printed products wherever possible.

Danagher Settlers in Australia in the 19th Century