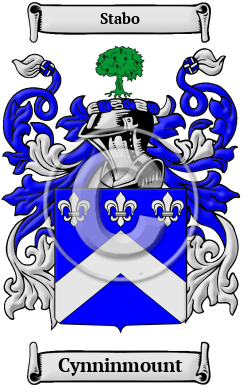 Early Origins of the Cynninmount family

The surname Cynninmount was first found in Fife, where they were a Clan seated from ancient times at two seats in that county, one at Kinnimonth in Monimail, and the other at Pittscottie. The clan also branched to what is now Kinmouth in Banff, and to Kinmont in Annandale, whence they became associated with the Armstrongs of the Debateable Land. In 1189, King William the Lion of Scotland confirmed the grant of lands on Odo the great Marshall, a descendant of Bishop Odo, the great Norman noble who attended Duke William of Normandy at the Battle of Hastings. Odo became known as Odo of Kinninmonth, hence the first bearer of the surname. His brother Matthew, was Bishop of Aberdeen from 1172 to 1199.

Early History of the Cynninmount family

Migration of the Cynninmount family to Ireland

Some of the Cynninmount family moved to Ireland, but this topic is not covered in this excerpt.
Another 36 words (3 lines of text) about their life in Ireland is included in all our PDF Extended History products and printed products wherever possible.

Migration of the Cynninmount family