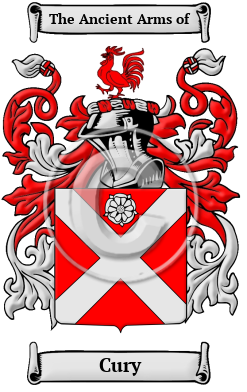 A family of Strathclyde-Briton were the first to use the name Cury. They lived the place named Currie, derived from Gaelic curraigh, in Midlothian, on record since 1230. Some instances of this name in Scotland are also known to have derived the place name Corrie in Dumfriesshire.

Early Origins of the Cury family

The surname Cury was first found in Midlothian, where they held a family seat from very ancient times, some say well before the Norman Conquest and the arrival of Duke William at Hastings in 1066 A.D.

Early History of the Cury family

This web page shows only a small excerpt of our Cury research. Another 139 words (10 lines of text) covering the years 1179, 1291, and 1570 are included under the topic Early Cury History in all our PDF Extended History products and printed products wherever possible.

In the era before dictionaries, there were no rules governing the spelling or translation of names or any other words. Consequently, there are an enormous number of spelling variations in Medieval Scottish names. Cury has appeared as Currie, Curry, Currey and others.

More information is included under the topic Early Cury Notables in all our PDF Extended History products and printed products wherever possible.

Migration of the Cury family to Ireland

Some of the Cury family moved to Ireland, but this topic is not covered in this excerpt.
Another 78 words (6 lines of text) about their life in Ireland is included in all our PDF Extended History products and printed products wherever possible.

Cury migration to the United States +

Cury Settlers in United States in the 18th Century