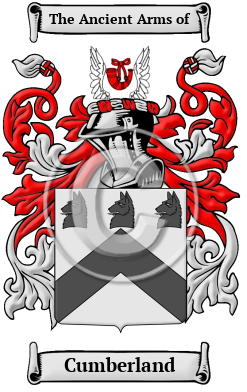 The Anglo-Saxon name Cumberland comes from when the family resided in the county of Cumberland. As a general rule, the greater the distance between individuals and their homeland, the larger the territory they were named after. For example, people who only moved to another parish would be known by the name of their original village, while people who migrated to a different country were often known by the name of a region or country from which they came.

Early Origins of the Cumberland family

The surname Cumberland was first found in Cumberland, a historic county of North West England that existed from the 12th century until 1974. The earliest record of the place was when it was listed as Cumbraland in 945 in the Anglo Saxon Chronicle and literally meant "region of the Cymry or Cumbrian Britons" from the Old English words Cumbre + land. [1]

Early History of the Cumberland family

The English language only became standardized in the last few centuries; therefore,spelling variations are common among early Anglo-Saxon names. As the form of the English language changed, even the spelling of literate people's names evolved. Cumberland has been recorded under many different variations, including Cumberland, Cumbeland, Cumberlande, Comerland and many more.

Notables of the family at this time include Richard Cumberland (1631-1718), an English philosopher and Bishop of Peterborough, born on 15 July 1631, in the parish of St. Bride's, London. "His father was a citizen of Fleet Street. He was educated at St. Paul's School, and in 1648 admitted to Magdalene College, Cambridge. His great-grandson Richard Cumberland (1732-1811), was a dramatist, born on 19 Feb. 1732, in the Master's Lodge at Trinity College...
Another 73 words (5 lines of text) are included under the topic Early Cumberland Notables in all our PDF Extended History products and printed products wherever possible.

In the United States, the name Cumberland is the 13,818th most popular surname with an estimated 2,487 people with that name. [3]

Cumberland migration to the United States +

For many English families, the political and religious disarray that shrouded England made the far away New World an attractive prospect. On cramped disease-ridden ships, thousands migrated to those British colonies that would eventually become Canada and the United States. Those hardy settlers that survived the journey often went on to make important contributions to the emerging nations in which they landed. Analysis of immigration records indicates that some of the first North American immigrants bore the name Cumberland or a variant listed above:

Cumberland Settlers in United States in the 18th Century

Cumberland Settlers in United States in the 19th Century

Cumberland Settlers in Canada in the 18th Century

Cumberland Settlers in Australia in the 19th Century

Cumberland Settlers in New Zealand in the 19th Century