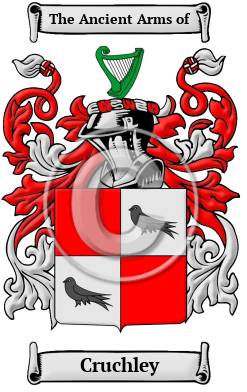 The Anglo-Saxon name Cruchley comes from when the family resided as dwellers at the crosslea. The surname Cruchley originally derived from the Old English word cruche which meant cross or crucifix. [1]

Other sources disagree. One source claims the name is from "Crickley; a location name in Gloucestershire." [2] And another claims the name is "from a geographical locality 'of Critchlow,' or 'Chritchlow,' some small spot in Lancashire, probably in the neighbourhood of Chorley. I have failed to discover it." [3]

We can find no record of Chritchlow in Lancashire today.

Early Origins of the Cruchley family

The surname Cruchley was first found in Northumberland where Vkke de Crikelawa was listed in the Pipe Rolls of 1176. Later, John de Cruchelowe was found in Lancashire in 1342. [4]

Early Cheshire records proved to be resourceful. The Wills at Chester include: Richard Crichlow, of Leyland, 1587; John Crichlowe, of Croxton, 1593; and Thomas Chrichlowe, of Leyland, 1606. The use of the spellings Critchley and Chrichlow seemed to be interchangeable as the Preston Guild Rolls record the same person with different spellings at different times: Edmund Crichlow, 1662; and Edmund Critchley, 1682. [3]

The Lancashire Wills at Richmond list Anne Chrichlaw, of Ashtonliank, 1673; and William Critchley, of Lea, 1673.

In Scotland, the spelling used was typically Critchley, and was "recorded in Inverness, doubtless from Critchlow or Chritchlaw, some small spot in Lancashire." [5]

Early History of the Cruchley family

This web page shows only a small excerpt of our Cruchley research. Another 91 words (6 lines of text) covering the years 1150, 1200 and 1600 are included under the topic Early Cruchley History in all our PDF Extended History products and printed products wherever possible.

More information is included under the topic Early Cruchley Notables in all our PDF Extended History products and printed products wherever possible.

Migration of the Cruchley family

For many English families, the political and religious disarray that shrouded England made the far away New World an attractive prospect. On cramped disease-ridden ships, thousands migrated to those British colonies that would eventually become Canada and the United States. Those hardy settlers that survived the journey often went on to make important contributions to the emerging nations in which they landed. Analysis of immigration records indicates that some of the first North American immigrants bore the name Cruchley or a variant listed above: William Critchlow, who settled in Barbados in 1680; with his wife, two children, and servants; Henry and Thomas Critchley, who settled in Philadelphia, Pennsylvania in 1866 and 1875 respectively. In Newfoundland, James Critchley settled in Greenspond in 1841..