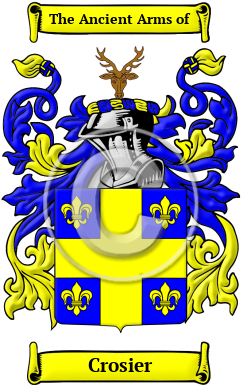 This name is "derived from an official title. 'the crosier,' one who carried the bishop's cross or pastoral staff." [1] It is derived from the "Old French, crosier, crocier, crosser ‘crosier’, the bearer of a bishop’s crook or pastoral staff, or of the cross at a monastery. The name might also denote a seller of crosses or a dweller by a cross. Croyser is the common early form." [2]

Early Origins of the Crosier family

The surname Crosier was first found in Liddesdale, where they belonged to an old Border Clan seated at Liddisdale, Roxburghshire. [3]

"Persons of this name were early settlers in Liddesdale, and c. 1376 we find "locus Croyser" in the rent-roll of the lordship. William Crosier, professor of philosophy in the newly founded University of St. Andrews, 1410. William Croyser, a Scotsman at present in Bruges, in Flanders, to have a safe conduct in England in 1429, is perhaps Master William Croyser, archdeacon of Teviotdale, who had a safe conduct to travel in England in 1433." [4]

While the name is most famous in Scotland, in England the first record of the family was William le Croyser who was listed at Eynsham, Oxfordshire in 1264. William le Crocer was found in Suffolk in 1305 and Thomasa Croser was listed in the Feet of Fines for Essex in 1393. [2]

Near the border of Scotland and England, Yorkshire listed Cristiana Croiser; and Johannes Croser in the Yorkshire Poll Tax Rolls of 1379. [1]

Early History of the Crosier family

Spelling variations of this family name include: Crozier, Crosier, Croyser, Crosar, Crozer and others.

Notable amongst the family at this time was William Crozier, the English oboe player, whose tone and exquisite taste will not soon be forgotten by those who heard him in the Crystal Palace...
Another 33 words (2 lines of text) are included under the topic Early Crosier Notables in all our PDF Extended History products and printed products wherever possible.

In the United States, the name Crosier is the 12,868th most popular surname with an estimated 2,487 people with that name. [6]

Migration of the Crosier family to Ireland

Some of the Crosier family moved to Ireland, but this topic is not covered in this excerpt.
Another 57 words (4 lines of text) about their life in Ireland is included in all our PDF Extended History products and printed products wherever possible.

Crosier migration to the United States +

Crosier Settlers in United States in the 18th Century

Crosier Settlers in United States in the 19th Century

Crosier Settlers in Canada in the 19th Century