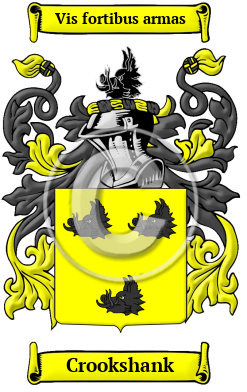 An ancient Pictish-Scottish family was the first to use the name Crookshank. It is a name for someone who lived at or near the Cruick River in Kincardinshire. The word shank means a point of a hill. Some people mistakenly think the name is a nickname for someone who had crooked shanks or was bowlegged but this was not the case. [1]

Early Origins of the Crookshank family

The surname Crookshank was first found in Kincardineshire (Gaelic: A' Mhaoirne), a former county on the northeast coast of the Grampian region of Scotland, and part of the Aberdeenshire Council Area since 1996, where they held a family seat from very ancient times.

"The two counties with which the name is most intimately connected are Kincardine and Aberdeen, and in the former we have the river Cruick rising in the parish of Fearn and joining the North Esk near the Kirk of Stracathro." [1]

Some of the first records of the family include John Crokeshanks, burgess of Haddington, who rendered homage to King Edward I of England in 1296 and Christin Crukschank who is mentioned in foundation charter of the chapel of Urchany in 1334. Later, Cristinus Cru sank was admitted burgess of Aberdeen in 1408, and John Cru sank was one of the burgesses of Aberdeen selected to accompany the provost to the field of Harlaw in 1411. [1]

Early History of the Crookshank family

During the Middle Ages, there was no basic set of rules and scribes wrote according to sound. The correct spelling of Scottish names were further compromised after many haphazard translations from Gaelic to English and back. Spelling variations of the name Crookshank include Cruickshank, Cruikshank, Crookshank, Crookshanks and many more.

More information is included under the topic Early Crookshank Notables in all our PDF Extended History products and printed products wherever possible.

Crookshank migration to the United States +

Scots left their country by the thousands to travel to Australia and North America. Desperate for freedom and an opportunity to fend for themselves, many paid huge fees and suffered under terrible conditions on long voyages. Still, for those who made the trip, freedom and opportunity awaited. In North America, many fought their old English oppressors in the American War of Independence. In recent years, Scottish heritage has been an increasingly important topic, as Clan societies and other organizations have renewed people's interest in their history. An examination of passenger and immigration lists shows many early settlers bearing the name of Crookshank:

Crookshank Settlers in United States in the 17th Century

Crookshank Settlers in United States in the 18th Century

Crookshank Settlers in United States in the 19th Century

Crookshank Settlers in United States in the 20th Century

Crookshank Settlers in Canada in the 18th Century

Crookshank Settlers in Canada in the 19th Century

Crookshank Settlers in West Indies in the 17th Century