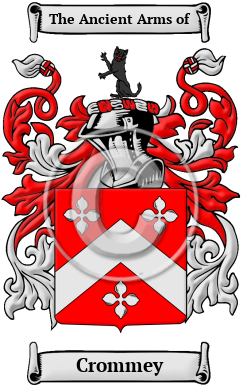 Crommey is an ancient Anglo-Saxon name. It was a name given to a person who was a person with an abnormal curvature of the spine. The surname Crommey is derived from the Old English word crump, which means bent or crooked. [1]

Early Origins of the Crommey family

The surname Crommey was first found in Herefordshire, where "Thomas Crump was mayor of Hereford in 1610. The Crumps are also established in Gloucestershire, Worcestershire, and Monmouthshire, and further reference to them will be found under one or more of those counties." [2]

Looking back further, researchers found entries in the Hundredorum Rolls of 1273 with early spellings of the family: Richard le Crumppe, Salop (Shropshire); and Constancia Crompe, Oxfordshire. [3]

"The surname is well known in the United States. Bridget Crompe emigrated to Virginia in 1635, and Thomas Crompe was already settled there in 1634." [3]

Early History of the Crommey family

This web page shows only a small excerpt of our Crommey research. Another 95 words (7 lines of text) covering the years 1176, 1273, 1564, 1382, 1711 and 1800 are included under the topic Early Crommey History in all our PDF Extended History products and printed products wherever possible.

One relatively recent invention that did much to standardize English spelling was the printing press. However, before its invention even the most literate people recorded their names according to sound rather than spelling. The spelling variations under which the name Crommey has appeared include Crump, Crumpe, Crompe, Crum, Crummey, Crumb, Crumbe, Crombe, Crom, Cromm, Cromp, Crumm, Crommey, Crummie, Crummy, Crommie and many more.

Notables of this surname at this time include: Henry Crump ( fl. 1382), Irish theologian, an Irishman by birth. He entered the Cistercian order in the monastery of Balkynglas, that is, Baltinglass...
Another 31 words (2 lines of text) are included under the topic Early Crommey Notables in all our PDF Extended History products and printed products wherever possible.

Migration of the Crommey family to Ireland

Some of the Crommey family moved to Ireland, but this topic is not covered in this excerpt.
Another 80 words (6 lines of text) about their life in Ireland is included in all our PDF Extended History products and printed products wherever possible.

Migration of the Crommey family

At this time, the shores of the New World beckoned many English families that felt that the social climate in England was oppressive and lacked opportunity for change. Thousands left England at great expense in ships that were overcrowded and full of disease. A great portion of these settlers never survived the journey and even a greater number arrived sick, starving, and without a penny. The survivors, however, were often greeted with greater opportunity than they could have experienced back home. These English settlers made significant contributions to those colonies that would eventually become the United States and Canada. An examination of early immigration records and passenger ship lists revealed that people bearing the name Crommey arrived in North America very early: Giles Crump, who settled in Virginia in 1637; and was followed by Thomas Crump in 1653. Francis Crump settled in Jamaica in 1760; Margaret Crump settled in Pennsylvania in 1772.