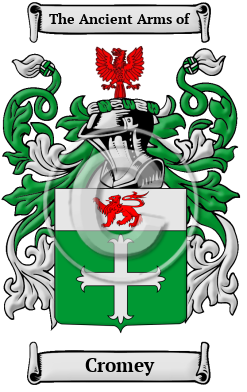 Cromey is a name that dates back to the kingdom of Dalriada in ancient Scotland. It was given to someone who lived in the place Crombie, in the parish of Aucterless in the shire of Aberdeen. The place-name Crombie was originally derived from the Gaelic term "crom," which means "crooked."

The Cromarty variant probably hails from Cromarty, a burgh of barony, sea-port, and parish, in the county of Ross and Cromarty, 175 miles from Edinburgh. "This place, of which the Gaelic name, Crom Ba, signifying the crooked bay, is derived from the winding shore of the Frith of Cromarty, appears to have attained to some importance at an early period, though few details of its ancient history are recorded. " [1]

Early Origins of the Cromey family

The surname Cromey was first found in Aberdeenshire (Gaelic: Siorrachd Obar Dheathain), a historic county, and present day Council Area of Aberdeen, located in the Grampian region of northeastern Scotland, where they held a family seat from very ancient times, on the lands of Crummy The land belonged to the Abbey of Culross, which was built on land gifted by Malcolm, 7th Earl of Fife, in 1217, during the reign of Alexander II.

Early History of the Cromey family

This web page shows only a small excerpt of our Cromey research. Another 88 words (6 lines of text) covering the years 1450, 1516, 1600, 1797 and are included under the topic Early Cromey History in all our PDF Extended History products and printed products wherever possible.

Spelling in the medieval era was a highly imprecise process. Translation, particularly from Gaelic to English, was little better. For these reasons, early Scottish names are rife with spelling variations. In various documents Cromey has been spelled Crombie, Cromby, Crommie, Crommy, Cromy, Cromie, Crumbie, Crummie, Crumby, Croombie, Croommie and many more.

More information is included under the topic Early Cromey Notables in all our PDF Extended History products and printed products wherever possible.

Migration of the Cromey family to Ireland

Some of the Cromey family moved to Ireland, but this topic is not covered in this excerpt.
Another 90 words (6 lines of text) about their life in Ireland is included in all our PDF Extended History products and printed products wherever possible.

Cromey migration to the United States +

Many of the ancestors of Dalriadan families who arrived in North America still live in communities along the east coast of Canada and the United States. In the American War of Independence many of the original settlers traveled north to Canada as United Empire Loyalists. In the late 19th and early 20th centuries the ancestors of many Scots began recovering their collective national heritage through Clan societies, highland games, and other patriotic events. Research into the origins of individual families in North America revealed records of the immigration of a number of people bearing the name Cromey or a variant listed above:

Cromey Settlers in United States in the 17th Century