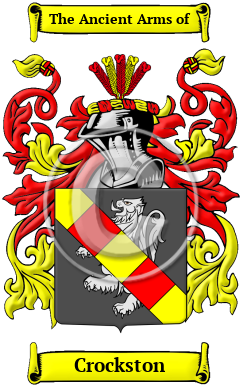 The origins of the Crockston name lie with England's ancient Anglo-Saxon culture. It comes from when the family lived in one of the settlements called Croxton in Cambridgeshire, Cheshire, Lincolnshire, Norfolk, or Staffordshire; in Croxton Kerrial or South Croxton in Leicestershire; or in Croxton Green in Cholmondeley, which is in the county of Cheshire. Six of the Croxton villages or parishes are listed in the Domesday Book of 1086, and were typically entered as Crochestone. The place name literally means "farmstead in a nook, or of a man called Krokr." [1]

Early Origins of the Crockston family

The surname Crockston was first found in Cheshire, but there are parishes and hamlets in Cambridgeshire, Lincolnshire, Norfolk, Leicestershire, and Staffordshire which explain why in the Hundredorum Rolls of 1273, we find such scattered listings throughout ancient Britain: Elena de Croxstone, Huntingdonshire; Sarra de Croxtone, Cambridgeshire; Abbas de Crokeston, or Croxton, Leicestershire; and Richard de Croxtone, Northumberland. [2]

But Cheshire is the ancient homeland of the family as "there are places so called in various counties, but the eminent family of this name spring from the township of Croxton, co. Chester, their [family] seat in very early times." [3]

It is generally thought that the family descend from the Lordship of Jocelyn or Godric, a Norman Baron recorded at the time of the Domesday Book of 1086. [4]

Early History of the Crockston family

Before the last few hundred years, the English language had no fast system of spelling rules. For that reason, spelling variations are commonly found in early Anglo-Saxon surnames. Over the years, many variations of the name Crockston were recorded, including Croxton, Crockston, Cruxton, Croxon and others.

Distinguished members of the family include Thomas Croxton (1603?-1663?), English parliamentarian, son of George Croxton of Ravenscroft, Northwich hundred, Cheshire. "He was colonel in the parliamentary army in 1650; militia commissioner for Chester the same year; member of a court-martial for trial of certain misdemeanants of quality on 10 Sept. 1651, and was continued in the militia commission in March 1654-5. In 1659 he was in command of Chester Castle when Sir George Booth's rising took place. The rebels entered the town and called upon him to surrender. He is said to have replied ‘that as perfidiousness in him was detestable...
Another 122 words (9 lines of text) are included under the topic Early Crockston Notables in all our PDF Extended History products and printed products wherever possible.

Migration of the Crockston family to Ireland

Some of the Crockston family moved to Ireland, but this topic is not covered in this excerpt. More information about their life in Ireland is included in all our PDF Extended History products and printed products wherever possible.

Migration of the Crockston family

To escape oppression and starvation at that time, many English families left for the "open frontiers" of the New World with all its perceived opportunities. In droves people migrated to the many British colonies, those in North America in particular, paying high rates for passages in cramped, unsafe ships. Although many of the settlers did not make the long passage alive, those who did see the shores of North America perceived great opportunities before them. Many of the families that came from England went on to make essential contributions to the emerging nations of Canada and the United States. Research into various historical records revealed some of first members of the Crockston family emigrate to North America: John Croxton arrived on the Mayflower with his son, John; Randle Croxton settled Pennsylvania in 1682; Thomas and Walter Croxton settled in New Orleans in 1842..