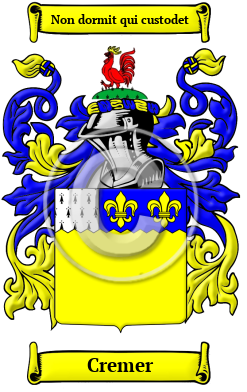 The Irish surnames in use today are underpinned by a multitude of rich histories. The name Cremer originally appeared in Gaelic as "Mac Threinfir," from the words "trean," which means "strong," and "fear" which means "man." This name is often rendered MacTraynor or MacTreanor in English, but the Anglicizations Mac Crainor and MacCreanor are actually more phonetically accurate.

Early Origins of the Cremer family

The surname Cremer was first found in County Cork (Irish: Corcaigh) the ancient Kingdom of Deis Muin (Desmond), located on the southwest coast of Ireland in the province of Munster, where they held a family seat from early times.

Early History of the Cremer family

This web page shows only a small excerpt of our Cremer research. Another 102 words (7 lines of text) covering the years 1670 and 1800 are included under the topic Early Cremer History in all our PDF Extended History products and printed products wherever possible.

The recording of names in Ireland in the Middle Ages was an inconsistent endeavor at best. The many regional dialects and the predominate illiteracy would have made common surnames appear unrelated to the scribes of the period. Research into the name Cremer revealed spelling variations, including Cramer, Creamer, McCramer, McCreamer and others.

More information is included under the topic Early Cremer Notables in all our PDF Extended History products and printed products wherever possible.

Cremer migration to the United States +

Irish families began to immigrate to British North America and the United States in the 18th century, but the greatest influx of Irish immigrants came during the Great Potato Famine of the late 1840s. The earlier settlers came to North America after a great deal of consideration and by paying relatively high fees for their passage. These settlers were primarily drawn by the promise of land. Those later settlers that came during the 1840's were trying to escape the conditions of poverty, starvation, disease, and death that had stricken Ireland. Due to the enormity of their numbers and the late date of their arrival, these immigrants primarily became hired laborers instead of homesteading settlers like their predecessors. An exhaustive search of immigration and passenger lists has revealed many Irish immigrants North America bearing the name Cremer:

Cremer Settlers in United States in the 17th Century

Cremer Settlers in United States in the 19th Century

Cremer Settlers in United States in the 20th Century

Cremer Settlers in New Zealand in the 19th Century

Historic Events for the Cremer family +