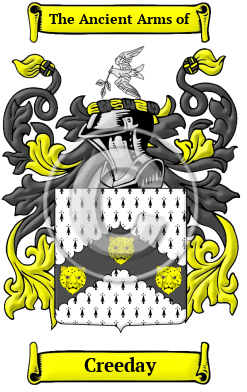 The illustrious surname Creeday finds its origin in the rocky, sea swept coastal area of southwestern England known as Cornwall. Although surnames were fairly widespread in medieval England, people were originally known only by a single name. The process by which hereditary surnames were adopted is extremely interesting. As populations grew, people began to assume an extra name to avoid confusion and to further identify themselves. Under the Feudal System of government, surnames evolved and they often reflected life on the manor and in the field. Lords and their tenants often became known by the name of the feudal territory they owned or lived on. Unlike most Celtic peoples, who favored patronymic names, the Cornish predominantly used local surnames. This was due to the heavy political and cultural influence of the English upon the Cornish People at the time that surnames first came into use. Local surnames were derived from where a person lived, held land, or was born. While many Cornish surnames of this sort appear to be topographic surnames, which were given to people who resided near physical features such as hills, streams, churches, or types of trees, many are actually habitation surnames derived from lost or unrecorded place names. The name Creeday is a local type of surname and the Creeday family lived in the parish of Creed in the county of Cornwall. "Crede is manifestly a personal name in the Hundred Rolls in districts far removed from Cornwall. It occurs in every case without a prefix, in itself an argument in favour of a fontal origin. No doubt it means creed, i.e. belief, answering to faith, so familiar as a girl's name later on." [1]

Early Origins of the Creeday family

The surname Creeday was first found in Cornwall at Creed, a parish, in the union of St. Austell, W. division of the hundred of Powder. There is another Creed in the East division of Sussex, but the former is where this family hails. [2] Originally known as Sancta Crida, the Cornish parish means "Church of St. Cride," from the patron saint of the church. [3]

Early History of the Creeday family

Notable amongst the family at this time was Adam Creedy (fl. 1388), an English politician, Member of the Parliament for Exeter in 1388; and Sir James Creed (c. 1695-1762), an English merchant and politician, Member of Parliament for Canterbury (1754-1761), Fellow of the Royal Society in February, 1743. Elizabeth Creed (1644?-1728), was an English philanthropist, born in or about 1644, the only daughter of Sir Gilbert Pickering, bart., of Tichmarsh, Northamptonshire. "In October 1668 she became the wife of John Creed [see below] of Oundle, Northamptonshire, who appears to have been at one time a retainer in the service of Lord Sandwich...
Another 150 words (11 lines of text) are included under the topic Early Creeday Notables in all our PDF Extended History products and printed products wherever possible.

Migration of the Creeday family to Ireland

Some of the Creeday family moved to Ireland, but this topic is not covered in this excerpt.
Another 261 words (19 lines of text) about their life in Ireland is included in all our PDF Extended History products and printed products wherever possible.

Migration of the Creeday family

An examination into the immigration and passenger lists has discovered a number of people bearing the name Creeday: Penelope Creed who arrived in New York in 1820; Jonathon Creed arrived in Barbados in 1679 with his wife and daughter; Edward Creed settled in Virginia in 1663.