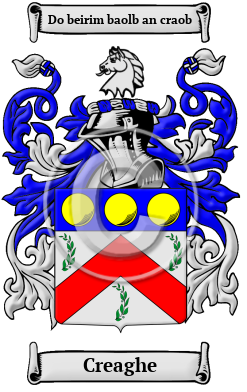 The surname is one of the many Irish surnames rooted in Gaelic language native to Ireland. The original Gaelic form of the name Creaghe is Craobhach, derived from the word "craobh," which means "branch."

Early Origins of the Creaghe family

The surname Creaghe was first found in County Clare (Irish: An Clár) located on the west coast of Ireland in the province of Munster, where this ancient Irish family was descended from King Niall of "the Nine Hostages," the great General King, who in turn was descended from the Heremon line of Irish Kings.

The Creaghs were one of the celebrated septs and leading gentry of the County Clare. They were a branch of the O'Neills of County Clare and tradition has it that they carried green branches with them into battle against the Norsemen at Limerick.

Their name is derived from the Irish surname Craobhach, which is the adjective formed from the noun "craob," a branch. Other names are derived from this source as well such as Cray, the anglicized form of O Craoibhe meaning "descendant of Craobhach."

Early History of the Creaghe family

People who were accounted for by scribes and church officials often had their name recorded many different ways because pronunciation was the only guide those scribes and church officials had to go by. This resulted in the problem of one person's name being recorded under several different variations, creating the illusion of more than one person. Among the many spelling variations of the surname Creaghe that are preserved in archival documents are Creagh, Crear, Creag, Creavagh, Cray and others.

Prominent amongst the family at this time was Richard Creagh (1525?-1585), born in Limerick, an Irish Catholic Archbishop of Armagh who died in the Tower of London. Called also Crvagh, Crewe, and in Irish O'Mulchreibe, he was born about 1525, being the son of Nicholas Creagh, a merchant of the city of Limerick. "On 8 May 1567 he was arrested in Connaught, and in August was tried for high treason in Dublin. Though acquitted, he was detained in prison, but he escaped soon afterwards. Before the end of the year he was recaptured, sent to London, and lodged in the Tower...
Another 169 words (12 lines of text) are included under the topic Early Creaghe Notables in all our PDF Extended History products and printed products wherever possible.

Creaghe Settlers in New Zealand in the 19th Century