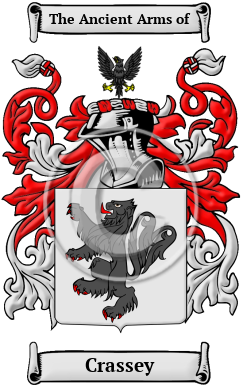 The name Crassey was brought to England by the Normans when they conquered the country in 1066. The ancestors of the Crassey family lived in Northumberland. The family originally lived in Crecy (Cressy), Normandy. The name was "from the Lordship so named, near Dieppe and Rouen. Hugh de Cressy, and Simon, occur in Normandy 1180-1195. Anselm and Gilbert de Cressy c. 1119 held lands from the Earls of Warrenne in England." [1] The same source continues with another possible origin. "Hugh de Cresseio was of Huntingdonshire, 1130. He was son of Guy le Roux, Lord of Creci in La Brie, Senschal of France." [1]

Early Origins of the Crassey family

The surname Crassey was first found in Norfolk at Beeston Regis, a parish, in the union of Erpingham, hundred of North Erpingham. "Here are some remains, consisting chiefly of the west end of the church, with a small tower, and part of the chapter-house, of a priory of Augustine canons, founded in the reign of John by Lady Isabel de Cressey, and the revenue of which, at the Dissolution, was £50. 6. 4." [2] Hugh de Cressy (died 1189) was an Anglo-Norman administrator and nobleman. Unfortunately little more is known of both people.

The Battle of Crécy (Cressy) was fought on 26 August 1346 near Créy, in northern France. This important English victory over the much larger French army led by Philip VI of France was due to tactical flexibility learned from battles with the Vikings, Muslims and the Scots.

Early History of the Crassey family

This web page shows only a small excerpt of our Crassey research. Another 125 words (9 lines of text) covering the years 1390, 1450, 1605, 1674 and 1646 are included under the topic Early Crassey History in all our PDF Extended History products and printed products wherever possible.

It is only in the last few hundred years that the English language has been standardized. For that reason, Anglo-Norman surnames like Crassey are characterized by many spelling variations. Scribes and monks in the Middle Ages spelled names they sounded, so it is common to find several variations that refer to a single person. As the English language changed and incorporated elements of other European languages such as Norman French and Latin, even literate people regularly changed the spelling of their names. The variations of the name Crassey include Creasey, Cressy, Crecy, Cressi, Crease, Cresey and others.

Outstanding amongst the family at this time was Hugh Cressy, English politician, Member of Parliament for Nottinghamshire in 1390. Robert Cressy ( fl. 1450?), was a Carmelite, a student at Oxford, where he distinguished himself as a theologian. Hugh Paulinus Cressy...
Another 39 words (3 lines of text) are included under the topic Early Crassey Notables in all our PDF Extended History products and printed products wherever possible.

Migration of the Crassey family

Faced with the chaos present in England at that time, many English families looked towards the open frontiers of the New World with its opportunities to escape oppression and starvation. People migrated to North America, as well as Australia and Ireland in droves, paying exorbitant rates for passages in cramped, unsafe ships. Many of the settlers did not make the long passage alive, but those who did see the shores of North America were welcomed with great opportunity. Many of the families that came from England went on to make essential contributions to the emerging nations of Canada and the United States. Some of the first immigrants to cross the Atlantic and come to North America carried the name Crassey, or a variant listed above: Charles Aston, Edward, and George Creasey, who all arrived in Philadelphia in 1852; William Creasey arrived in Philadelphia in 1832.