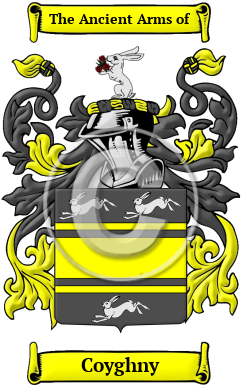 The ancestors of the Coyghny family lived among the ancient Anglo-Saxon tribes of Britain. Coyghny was a name given to a swift runner or a timid person. The surname Coyghny is derived from the Old English words conig and cony, which mean rabbit. [1] "The fact that Thomas Cony (1323, Freeman of York) was a pelter suggests that the surname may also have denoted a dealer in rabbit-skins, perhaps also a furrier." [2]

Early Origins of the Coyghny family

The surname Coyghny was first found in many counties throughout ancient Britain. The Hundredorum Rolls of 1273 list Richard Conni, Salop (Shropshire) and John Conay, Huntingdonshire. [1]

Early History of the Coyghny family

Coyghny has been spelled many different ways. Before English spelling became standardized over the last few hundred years, spelling variations in names were a common occurrence. As the English language changed in the Middle Ages, absorbing pieces of Latin and French, as well as other languages, the spelling of people's names also changed considerably, even over a single lifetime. Many variations of the name Coyghny have been found, including Coney, Coyney, Coyny, Cony, Conney, Conye, Coyney, Cony, Conny, Connay and many more.

Notables of the family at this time include Robert Conny (also Cony) (1646?-1713), an English physician. He was the "son of John Conny, surgeon, and twice mayor of Rochester, born in or about 1645. He was a member of Magdalen College, Oxford, and proceeded B.A. on 8 June 1676, M.A. 3 May 1679, M.B. 2 May 1682, and M.D. 9 July 1685." [6] John Coney (1786-1833), was an English draughtsman and engraver, born in Ratcliff Highway, London. He was apprenticed to an architect, but never followed the profession. Among his early studies were pencil...
Another 92 words (7 lines of text) are included under the topic Early Coyghny Notables in all our PDF Extended History products and printed products wherever possible.

Migration of the Coyghny family to Ireland

Some of the Coyghny family moved to Ireland, but this topic is not covered in this excerpt. More information about their life in Ireland is included in all our PDF Extended History products and printed products wherever possible.

Migration of the Coyghny family

In an attempt to escape the chaos experienced in England, many English families boarded overcrowded and diseased ships sailing for the shores of North America and other British colonies. Those families hardy enough, and lucky enough, to make the passage intact were rewarded with land and a social environment less prone to religious and political persecution. Many of these families became important contributors to the young colonies in which they settled. Early immigration and passenger lists have documented some of the first Coyghnys to arrive on North American shores: John Connay arrived in Philadelphia in 1865; Edmund Conney arrived in Barbados in 1680; John Conney settled in Boston in 1763; Richard Coney settled in New England in 1665.