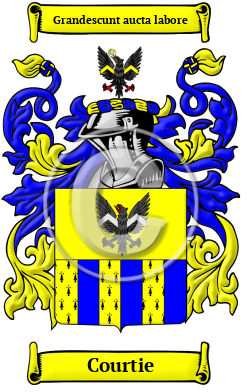 The ancient history of the Courtie name begins with the ancient Anglo-Saxon tribes of Britain. The name is derived from when the family resided at the court, a phrase which may have indicated either a large mansion or a tribunal. The prefix A was often dropped by the 13th century, when many branches of the family became known as Court. Some historians have suggested that certain variations of the name may be nicknames derived from the Old French and Old English word curt, meaning short or truncated. However, time has confused the different derivations, and it is now extremely difficult to tell which is appropriate to a given family or situation.

Early Origins of the Courtie family

The surname Courtie was first found in "Covert or Couert, Normandy, [who] held by the service of 1 fee of the barony or Braiose [Briouze]." [1] William de Braose (Briouze), First Lord of Bramber (died c. 1096) was granted extensive lands in Sussex by William the Conqueror. Accordingly, the Courtie family held lands from him in Sussex. In 1107, William de Cuvert witnessed the foundation charter of Barnstaple and years later William Guvert (Cuvert) held a fee of ancient enfeoffment from William de Courcy in Somerset. [1]

Early History of the Courtie family

This web page shows only a small excerpt of our Courtie research. Another 114 words (8 lines of text) covering the years 1532, 1582, 1550, 1552, 1553 and 1556 are included under the topic Early Courtie History in all our PDF Extended History products and printed products wherever possible.

Until quite recently, the English language has lacked a definite system of spelling rules. Consequently, Anglo-Saxon surnames are characterized by a multitude of spelling variations. Changes in Anglo-Saxon names were influenced by the evolution of the English language, as it incorporated elements of French, Latin, and other languages. Although Medieval scribes and church officials recorded names as they sounded, so it is common to find one person referred to by several different spellings of his surname, even the most literate people varied the spelling of their own names. Variations of the name Courtie include A'Court, Court, Courte, Couert, Covert, Courtie, Courts and many more.

Distinguished members of the family include Richard Curteys (1532?-1582), Bishop of Chichester, a native of Lincolnshire. "He received his academical education at St. John's College, Cambridge, where he was elected to a scholarship on the...
Another 34 words (2 lines of text) are included under the topic Early Courtie Notables in all our PDF Extended History products and printed products wherever possible.

Migration of the Courtie family to Ireland

Some of the Courtie family moved to Ireland, but this topic is not covered in this excerpt. More information about their life in Ireland is included in all our PDF Extended History products and printed products wherever possible.

Migration of the Courtie family

Searching for a better life, many English families migrated to British colonies. Unfortunately, the majority of them traveled under extremely harsh conditions: overcrowding on the ships caused the majority of the immigrants to arrive diseased, famished, and destitute from the long journey across the ocean. For those families that arrived safely, modest prosperity was attainable, and many went on to make invaluable contributions to the development of the cultures of the new colonies. Research into the origins of individual families in North America revealed records of the immigration of a number of people bearing the name Courtie or a variant listed above: Richard Court who settled in Virginia in 1637.