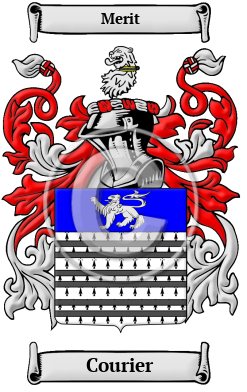 The history of the name Courier dates back to the ancient Anglo-Saxon culture of Britain. It is derived from a member of the family who worked as a messenger or person who dresses tanned leather. In the former case, the surname Courier is derived from the Old French words corëor or courreour, which mean courier. [1]

Early Origins of the Courier family

The surname Courier was first found in Yorkshire, where they held a family seat as Lords of the Manor of Kildwick from ancient times.

Eluding to the occupational nature of the name, we found Richard le Curer in the Assize Rolls for Northumberland in 1256 and Henry le Coureer in Berkshire in 1281. Maurice le curaour was listed as a Freeman of York in 1293 and further to the south, William le Coureour was recorded in Devon in 1314. [3]

William Curreyour, Robert Curreour and John Curreior were found in Colchester in 1375. Back in Yorkshire, Andrew Curier was listed as a Freeman of York in 1400. Robert Curryar was listed in the Feet of Fines for Huntingdonshire in 1546. [3]

Early History of the Courier family

Only recently has spelling become standardized in the English language. As the English language evolved in the Middle Ages, the spelling of names changed also. The name Courier has undergone many spelling variations, including Currer, Curror, Currier, Curryer, Conreor, Couraour, Curur, Curreour, Currour, Curryar, Corour and many more.

Notables of the family at this time include Nathaniel Currier (1813-1888), co-founder of Currier & Ives, American Lithographers who created famous prints of scenes of 19th century America...
Another 27 words (2 lines of text) are included under the topic Early Courier Notables in all our PDF Extended History products and printed products wherever possible.

Courier migration to the United States +

To escape the unstable social climate in England of this time, many families boarded ships for the New World with the hope of finding land, opportunity, and greater religious and political freedom. Although the voyages were expensive, crowded, and difficult, those families that arrived often found greater opportunities and freedoms than they could have experienced at home. Many of those families went on to make significant contributions to the rapidly developing colonies in which they settled. Early North American records indicate many people bearing the name Courier were among those contributors:

Courier Settlers in United States in the 18th Century

Courier Settlers in Canada in the 17th Century

Courier Settlers in Canada in the 19th Century