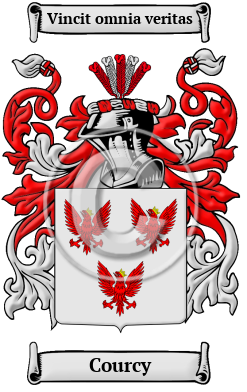 The Irish already had a system for creating hereditary surnames established when the followers of Strongbow settled in eastern Ireland. Although there was relatively little friction between the two systems because they operated according to very similar principles, the Strongbownians frequently used local surnames. In Ireland, local surnames were almost unheard of, but in England they were probably the most common form of hereditary surname. Local surnames, such as Courcy, were taken from the name of a place or a geographical feature where the person lived, held land, or was born. The surname Courcy is derived from in the settlement of Coursi in Normandy. The surname Courcy belongs to the large category of Anglo-Norman habitation names, which are derived from pre-existing names for towns, villages, parishes, or farmsteads. The Gaelic form of the surname Courcy is de Cúrsa.

Early Origins of the Courcy family

The surname Courcy was first found in County Cork (Irish: Corcaigh) the ancient Kingdom of Deis Muin (Desmond), located on the southwest coast of Ireland in the province of Munster, in Ireland, where this noble family claim descent from Holy Roman Emperor Charlemagne, King of France, who died in 814. Descended was Balderic Teutonicus, Earl of Brion in Normandy, who had six sons. The third son was Robert de Courcy, Lord of Courcy in Normandy. His son, Richard, was at the Battle of Hastings in 1066 A.D. and was granted Stoke-Courcy in Somerset, and other lands. His son John De Courcy, Baron of Stoke Courcy, was created Earl of Ulster by King Henry II for his assistance in conquering the province of Ulster, but Sir John was deprived of his Earldom by King John, who confined him to the Tower of London for one year and granted Ulster to Hugh de Lacie. His son Miles De Courcy, would move to Ireland where he was made the 1st Baron of Kingsale, County Cork. [1]

Patrick de Courcy was appointed Justiciar of Ireland in 1221. [2]

Early History of the Courcy family

A single person's name was often spelt simply as it sounded by medieval scribes and church officials. An investigation into the specific origins the name Courcy has revealed that such a practice has resulted in many spelling variations over the years. A few of its variants include: Courcy, Courcey, Courcie, Curcy, Cursie, Curcie and many more.

Notable amongst the family up to this time was Sir Richard de Courcy (died 1098) ; John de Courcy (1160-1219), an Anglo-Norman knight who arrived in Ireland in 1176...
Another 29 words (2 lines of text) are included under the topic Early Courcy Notables in all our PDF Extended History products and printed products wherever possible.

Courcy migration to the United States +

In the 1840s, Ireland experienced a mass exodus to North America due to the Great Potato Famine. These families wanted to escape from hunger and disease that was ravaging their homeland. With the promise of work, freedom and land overseas, the Irish looked upon British North America and the United States as a means of hope and prosperity. Those that survived the journey were able to achieve this through much hard work and perseverance. Early immigration and passenger lists revealed many bearing the name Courcy:

Courcy Settlers in United States in the 18th Century

Courcy Settlers in United States in the 19th Century

Courcy Settlers in Canada in the 18th Century