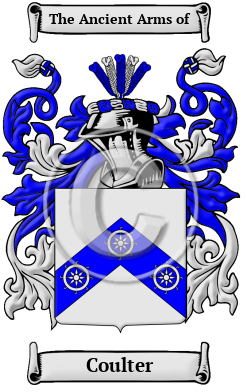 The forbears of the name Coulter are thought to be of the ancient Scottish kingdom of Dalriada. The name indicates that the first bearer lived in or near Coulter in Lanarkshire or Aberdeenshire, in Scotland. The surname Coulter is derived from the Gaelic phrase, cúl tir, which means, black land. Coulter is therefore a local surname, of which there are many types. For instance, topographic surnames could be given to a person who lived beside any physical feature, such as a hill, stream, church or type of tree. Habitation names form the other broad category of surnames that were derived from place-names. They were derived from pre-existing names for towns, villages, parishes, or farmsteads. Other local names are derived from the names of houses, manors, estates, regions, and entire counties. In this case, the surname is both topographical, in that it comes from the phrase, black land, and local in the general sense, since it comes from the place-name, Coulter.

Early Origins of the Coulter family

The surname Coulter was first found in Lanarkshire (Gaelic: Siorrachd Lannraig) a former county in the central Strathclyde region of Scotland, now divided into the Council Areas of North Lanarkshire, South Lanarkshire, and the City of Glasgow, where they held a family seat from very early times.

Some of the first records include: Richard of Culter, sheriff of Lanark, appears in record in 1226; and Alexander de Cultre witnessed a grant by Maldoueny, earl of Lennox to Stephen de Blantyr, c. 1248. "Andrew de Cultyr who held land in Aberdeen in 1281 doubtless derived his name from the lands of Coulter in Aberdeenshire." [1]

Early History of the Coulter family

This web page shows only a small excerpt of our Coulter research. Another 108 words (8 lines of text) covering the years 1226, 1281, 1686, 1810 and are included under the topic Early Coulter History in all our PDF Extended History products and printed products wherever possible.

Medieval spelling was at best an intuitive process, and translation between Gaelic and English was no more effective. These factors caused an enormous number of spelling variations in Dalriadan names. In fact, it was not uncommon to see a father and son who spelled their name differently. Over the years, Coulter has been spelled Coulter, Colter, Coalter, Coultere, Coultar, Coultur, Coltar, Coltur, Coltir, Coltire and many more.

More information is included under the topic Early Coulter Notables in all our PDF Extended History products and printed products wherever possible.

Migration of the Coulter family to Ireland

Some of the Coulter family moved to Ireland, but this topic is not covered in this excerpt.
Another 75 words (5 lines of text) about their life in Ireland is included in all our PDF Extended History products and printed products wherever possible.

Coulter migration to the United States +

Many settled along the east coast of what would become the United States and Canada. As the American War of Independence broke out, those who remained loyal to the crown went north to Canada as United Empire Loyalists. The ancestors of all of these hardy Dalriadan-Scottish settlers began to recover their collective history in the 20th century with the advent of the vibrant culture fostered by highland games and Clan societies in North America. Highland games, clan societies, and other organizations generated much renewed interest in Scottish heritage in the 20th century. The Coulter were among the earliest of the Scottish settlers as immigration passenger lists have shown:

Coulter Settlers in United States in the 17th Century

Coulter Settlers in United States in the 19th Century

Coulter Settlers in Canada in the 18th Century

Coulter Settlers in Canada in the 19th Century

Coulter Settlers in Australia in the 19th Century

Coulter Settlers in New Zealand in the 19th Century

Historic Events for the Coulter family +

Lady of the Lake

Suggested Readings for the name Coulter +