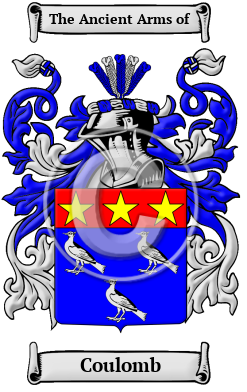 During that dark period of history known as the Middle Ages, the name of Coulomb was first used in France. While the patronymic and metronymic surnames, which are derived from the name of the father and mother respectively, are the most common form of a hereditary surname in France, occupational surnames also emerged during the late Middle Ages. Many people, such as the Coulomb family, adopted the name of their occupation as their surname. However, an occupational name did not become a hereditary surname until the office or type of employment became hereditary. The surname Coulomb was an occupational name for a keeper of doves or pigeons having derived from the Old French word "colombe," which means dove.

Early Origins of the Coulomb family

The surname Coulomb was first found in Guyenne, where this distinguished family held a family seat since the 1100's.

Early History of the Coulomb family

Notable amongst the name was Michel Colombe (c. 1430-c. 1513), a French sculptor whose work bridged the late Gothic and Renaissance styles; Jean Colombe (c. 1430-1493), a French miniature painter and illuminator of manuscripts; Christopher Columbus (1451-1506), the Italian explorer, navigator, and colonizer, in 1492 he departed from Palos de la Frontera, the Santa María ran aground on Christmas Day 1492, he had to leave 39 men behind, in September 1493 he left with a fleet of 17 ships, his third voyage was in...
Another 84 words (6 lines of text) are included under the topic Early Coulomb Notables in all our PDF Extended History products and printed products wherever possible.

Coulomb migration to the United States +

Coulomb Settlers in United States in the 19th Century