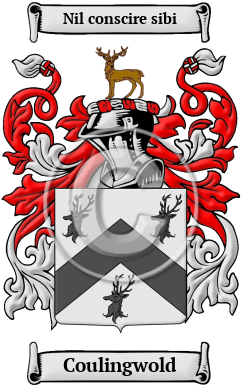 Early Origins of the Coulingwold family

The surname Coulingwold was first found in Northumberland. The township of Little Rye was an early home of this distinguished family. "This was the seat of the fourth son of Sir Daniel Collingwood, of Brandon, the descendant of Sir Cuthbert Collingwood, of Eslington, whose family were celebrated for their feats of border chivalry, and held considerable possessions in these parts. Alexander Collingwood, who resided at Little Ryle, was High Sheriff of the county in 1725. The old Hall, which stood in a fine sheltered situation, has long been in ruins." [1] A branch of the family was established in North Dissington, Northumberland in early times. "This place was formerly the property and residence of a junior branch of the Delaval family, of whom Admiral Sir Ralph Delaval, a native of the township, sold the estate to Mr. Collingwood, of Byker, from whom it descended to its present possessor. The Hall, the seat of Mr. Collingwood, is a substantial stone mansion, erected in 1797, and contains a small collection of pictures. " [1]

Early History of the Coulingwold family

Notable amongst the family name during their early history was Roger Collingwood ( fl. 1513), English mathematician, elected a fellow of Queens' College, Cambridge, in 1497. He was dean of his college in 1504, and obtained a license on 16 Sept. 1507 to travel on the continent during four years for the purpose of studying canon law. [2] Daniel Collingwood (c.1634-1681), was an English politician, Member of Parliament for Morpeth (1679-1681). George Collingwood (d. 1716), was...
Another 73 words (5 lines of text) are included under the topic Early Coulingwold Notables in all our PDF Extended History products and printed products wherever possible.

Migration of the Coulingwold family