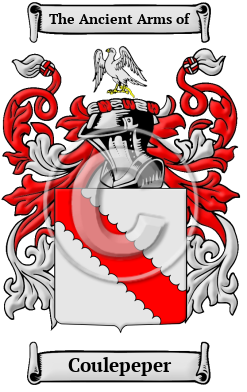 The ancient name of Coulepeper finds its origins with the ancient Anglo-Saxon culture of Britain. It comes from a name for a spicer. The name is derived from two Old English elements, cul and pepper. It meant "pepper gatherer." [1] As spices were rare and expensive in the medieval period, this would have been a valued occupation.

Early Origins of the Coulepeper family

The surname Coulepeper was first found in Kent where the family descend from Culpepers of Bay Hall, Pembury, Kent. It is generally thought that the first record of the family was John de Colepepper (c. 1140) from Bay Hall, Pepenbury. His son, Sir Thomas de Colpepper (1170-c.1200) was Recognitor of the Grand Assize in Sussex. He died in Sussex at the age of 30. Bay Hall Manor was held by the family until 1480 when it was sold Humphrey Stafford, Duke of Buckingham.

Early History of the Coulepeper family

Sound was what guided spelling in the essentially pre-literate Middle Ages, so one person's name was often recorded under several variations during a single lifetime. Also, before the advent of the printing press and the first dictionaries, the English language was not standardized. Therefore, spelling variations were common, even among the names of the most literate people. Known variations of the Coulepeper family name include Colepeper, Colpepper, Culpeper, Culpepper, Colepepper, Colpeper, Collpeper and many more.

Migration of the Coulepeper family