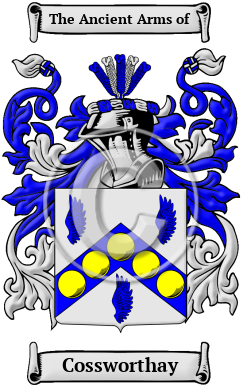 Early Origins of the Cossworthay family

The surname Cossworthay was first found in Cornwall where they held a family seat as Lords of the Manor of Cosworth.

Early History of the Cossworthay family

This web page shows only a small excerpt of our Cossworthay research. Another 187 words (13 lines of text) covering the years 1510, 1600, 1575, 1643, 1600 and 1568 are included under the topic Early Cossworthay History in all our PDF Extended History products and printed products wherever possible.

Notable amongst the family at this time was Michael Cosworth or Cosowarth (fl. 1600), English translator of the psalms, born in 1568, "the son of John Cosworth...
Another 27 words (2 lines of text) are included under the topic Early Cossworthay Notables in all our PDF Extended History products and printed products wherever possible.

Migration of the Cossworthay family