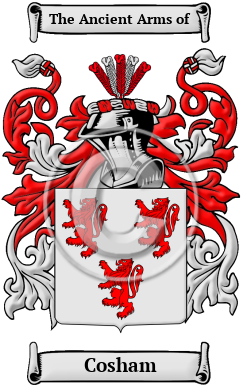 Early Origins of the Cosham family

The surname Cosham was first found in Hampshire where the surname is descended from the tenant of the lands of Cosham, held by Geofrey, a Norman noble, from Hugh de Port who was recorded in the Domesday Book census of 1086.

Early History of the Cosham family

This web page shows only a small excerpt of our Cosham research. Another 61 words (4 lines of text) covering the years 1248, 1296, 1554, 1624, 1572 and 1576 are included under the topic Early Cosham History in all our PDF Extended History products and printed products wherever possible.

Outstanding amongst the family at this time was Stephen Gosson (1554-1624), English author, 'a Kentish man,' admitted scholar of Corpus Christi College, Oxford, 4 April 1572. "He graduated B.A. at the...
Another 31 words (2 lines of text) are included under the topic Early Cosham Notables in all our PDF Extended History products and printed products wherever possible.

Cosham migration to the United States +

Cosham Settlers in United States in the 17th Century