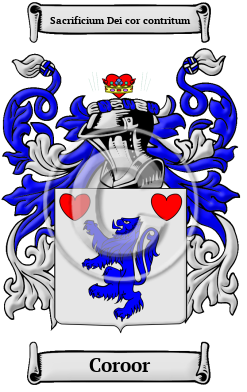 The ancient name of Coroor finds its origins with the ancient Anglo-Saxon culture of Britain. It comes from a name for a caulker, a person who waterproofed tubs, barrels, and ships. It is also possibly an occupational name for a person who made and sold a purple dye. However, that origin is in Ireland, and it is unlikely that it is connected to this Northern English name.

Early Origins of the Coroor family

The surname Coroor was first found in Lancashire, now part of the County of Cumbria where the family lived in Barrow-in-Furness, now a large industrial town and seaport community.

While the name has traditionally been understood to be a trade name, there is also a Norman influence as seen by Arnulf de Corcres who was listed in Normandy in the Mang. Rotuli Scaccarii Normanniae of 1180-1195. The same reference lists Geoffrey Chorger or Churger in England as listed in the Hundredorum Rolls (Rotuli Hundredorum) c. 1272. [1]

Early History of the Coroor family

Sound was what guided spelling in the essentially pre-literate Middle Ages, so one person's name was often recorded under several variations during a single lifetime. Also, before the advent of the printing press and the first dictionaries, the English language was not standardized. Therefore, spelling variations were common, even among the names of the most literate people. Known variations of the Coroor family name include Corker, Coroor, Corcher, Corkar and others.

Notables of the family at this time include Adam le Corker, a prominent 13th century landholder in Yorkshire; James Corker (1636-1715), Benedictine monk, a native of Yorkshire; Maurus (James) Corker (1636-1715) was an...
Another 33 words (2 lines of text) are included under the topic Early Coroor Notables in all our PDF Extended History products and printed products wherever possible.

Migration of the Coroor family to Ireland

Some of the Coroor family moved to Ireland, but this topic is not covered in this excerpt.
Another 45 words (3 lines of text) about their life in Ireland is included in all our PDF Extended History products and printed products wherever possible.

Migration of the Coroor family

For political, religious, and economic reasons, thousands of English families boarded ships for Ireland, the Canadas, the America colonies, and many of smaller tropical colonies in the hope of finding better lives abroad. Although the passage on the cramped, dank ships caused many to arrive in the New World diseased and starving, those families that survived the trip often went on to make valuable contributions to those new societies to which they arrived. Early immigrants bearing the Coroor surname or a spelling variation of the name include : Elizabeth Corker who arrived in Virginia in 1635.