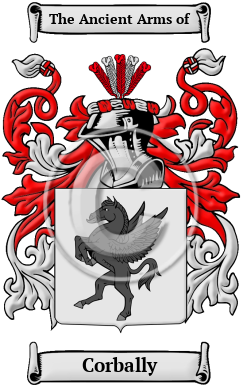 The surname is one of those rare Irish names that is derived from a place name; in this case, from Corballis. Corballis is derived from the Gaelic "cor baile," which means "odd or twisted towland." This most likely refers to the shape of the land in this region. Today there are several places named Corbally in Ireland, in Counties Limerick, Tipperary, and Waterford.

Early Origins of the Corbally family

The surname Corbally was first found in Dublin (Irish: Áth Cliath) located on the east coast of Ireland in the province of Leinster, where they held a family seat in the barony of Balrothery. Irish history was greatly influenced by the Norman invasion of 1172, and thereafter, the surnames of Irish Gaelic clanns and septs and many of the Norman families became almost indistinguishable. This family name was found later in Tallaght and Saggart where they represented the first recorded reference to the name. This is a name which is derived from a place name. The name was found later in County Louth.

Early History of the Corbally family

This web page shows only a small excerpt of our Corbally research. Another 93 words (7 lines of text) are included under the topic Early Corbally History in all our PDF Extended History products and printed products wherever possible.

Spelling variations of this family name include: Corbally, Corballis and others.

More information is included under the topic Early Corbally Notables in all our PDF Extended History products and printed products wherever possible.

Corbally migration to the United States +

Corbally Settlers in United States in the 19th Century

Corbally Settlers in Australia in the 19th Century