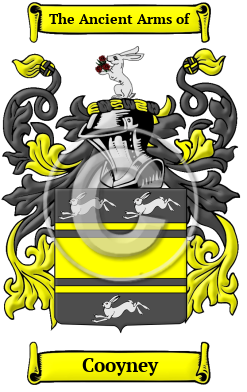 The history of the name Cooyney goes back those Anglo-Saxon tribes that once ruled over Britain. Such a name was given to a swift runner or a timid person. The surname Cooyney is derived from the Old English words conig and cony, which mean rabbit. [1] "The fact that Thomas Cony (1323, Freeman of York) was a pelter suggests that the surname may also have denoted a dealer in rabbit-skins, perhaps also a furrier." [2]

Early Origins of the Cooyney family

The surname Cooyney was first found in many counties throughout ancient Britain. The Hundredorum Rolls of 1273 list Richard Conni, Salop (Shropshire) and John Conay, Huntingdonshire. [1]

Early History of the Cooyney family

Sound was what guided spelling in the essentially pre-literate Middle Ages, so one person's name was often recorded under several variations during a single lifetime. Also, before the advent of the printing press and the first dictionaries, the English language was not standardized. Therefore, spelling variations were common, even among the names of the most literate people. Known variations of the Cooyney family name include Coney, Coyney, Coyny, Cony, Conney, Conye, Coyney, Cony, Conny, Connay and many more.

Notables of the family at this time include Robert Conny (also Cony) (1646?-1713), an English physician. He was the "son of John Conny, surgeon, and twice mayor of Rochester, born in or about 1645. He was a member of Magdalen College, Oxford, and proceeded B.A. on 8 June 1676, M.A. 3 May 1679, M.B. 2 May 1682, and M.D. 9 July 1685." [6] John Coney (1786-1833), was an English draughtsman and engraver, born in Ratcliff Highway, London. He was apprenticed to an architect, but never followed the profession. Among his early studies were pencil...
Another 92 words (7 lines of text) are included under the topic Early Cooyney Notables in all our PDF Extended History products and printed products wherever possible.

Migration of the Cooyney family to Ireland

Some of the Cooyney family moved to Ireland, but this topic is not covered in this excerpt. More information about their life in Ireland is included in all our PDF Extended History products and printed products wherever possible.

Migration of the Cooyney family

For political, religious, and economic reasons, thousands of English families boarded ships for Ireland, the Canadas, the America colonies, and many of smaller tropical colonies in the hope of finding better lives abroad. Although the passage on the cramped, dank ships caused many to arrive in the New World diseased and starving, those families that survived the trip often went on to make valuable contributions to those new societies to which they arrived. Investigation of the origins of family names on the North American continent has revealed that early immigrants bearing the name Cooyney or a variant listed above: John Connay arrived in Philadelphia in 1865; Edmund Conney arrived in Barbados in 1680; John Conney settled in Boston in 1763; Richard Coney settled in New England in 1665.