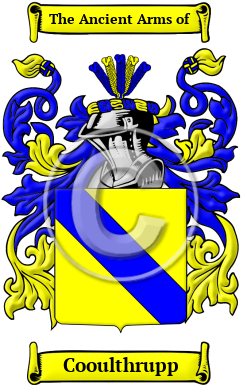 The illustrious surname Cooulthrupp is classified as a habitation surname, which was originally derived from a place-name, and is one form of surname belonging to a broader group called hereditary surnames. Habitation names were derived from pre-existing names for towns, villages, parishes, or farmsteads. Topographic names, form the other broad category of surnames that was given to a person who resided near a physical feature such as a hill, stream, church, or type of tree.

Other local names are derived from the names of houses, manors, estates, regions, and entire counties. As a general rule, the greater the distance between an individual and their homeland, the larger the territory they were named after. For example, a person who only moved to another parish would be known by the name of their original village, while people who migrated to a different country were often known by the name of a region or country from which they came. Cooulthrupp is a place-name from the place-name Calthorpe, a village and parish, in the union of Aylsham, hundred of South Erpingham, in the county of Norfolk. [1] This Saxon village was originally known as Calethorpe from 1044-1047 and literally meant "outlying farmstead or hamlet of a man called Kali." [2]

Early Origins of the Cooulthrupp family

The surname Cooulthrupp was first found in Norfolk where they held a family seat as Lords of the Manor of Calthorpe at the time of the taking of the Domesday Book survey in the year 1086 A.D. The survey showed that Calthorpe was a village containing a Church, 2.5 mills and 2 beehives. [3] It was held by Guerri and Osbert from Tihel the Breton from whom the Calthorpes are conjecturally descended.

By way of confirmation, another source notes: "he ancestors of Lord Catlthorpe assumed the name from Calthorpe, co. Norfolk, temp. Hen. III., and they are said to have been resident there from the time of the Conquest." [4]

The Hundredorum Rolls of 1273 had only one listing: Gilbert de Calthorp, who held lands in Norfolk at that time. [5]

Early History of the Cooulthrupp family

Since the Old and Middle English languages lacked definite spelling rules, Breton surnames have many spelling variations. Latin and French, which were the official court languages, were also influential on the spelling of surnames. The spelling of surnames was rarely consistent in medieval times, and scribes and church officials recorded names as they sounded rather than adhering to any specific spelling rules. Therefore, it was common to find the same individual referred to with different spellings of their surname in the ancient chronicles. Moreover, a large number of foreign names were brought into England after the Norman Conquest, which accelerated and accentuated the alterations to the spelling of various surnames. The name has been spelled Calthrop, Calthropp, Calthorp, Calthorpe, Cartharp, Carthrop, Carthropp, Carthorp and many more.

Migration of the Cooulthrupp family to Ireland

Some of the Cooulthrupp family moved to Ireland, but this topic is not covered in this excerpt.
Another 47 words (3 lines of text) about their life in Ireland is included in all our PDF Extended History products and printed products wherever possible.

Migration of the Cooulthrupp family

Some of the first immigrants to cross the Atlantic and come to North America carried the name Cooulthrupp, or a variant listed above: Charles Calthrop who settled in Virginia in 1623.