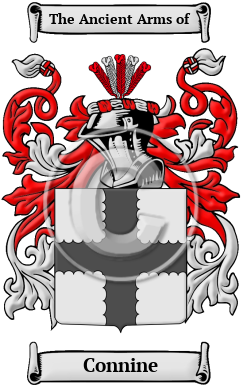 Connine was a name for a personal name Conan, which means little hound. The name could also be a local name from the land of Conan in Kincardinshire. In this situation, the name would have been a topographic or local surname, which was given to a family who held a barony or lands, had houses, manors or estates in that area.

Early Origins of the Connine family

The surname Connine was first found in Kincardineshire (Gaelic: A' Mhaoirne), a former county on the northeast coast of the Grampian region of Scotland, and part of the Aberdeenshire Council Area since 1996, where Adam filius Conani was probably the first recording of the name in 1292. A few years later, Conan of Balquhidder rendered homage to King Edward I of England on his brief conquest of Scotland in 1296.

Early History of the Connine family

This web page shows only a small excerpt of our Connine research. Another 70 words (5 lines of text) covering the years 1608, 1694 and 1608 are included under the topic Early Connine History in all our PDF Extended History products and printed products wherever possible.

During the Middle Ages, there was no basic set of rules and scribes wrote according to sound. The correct spelling of Scottish names were further compromised after many haphazard translations from Gaelic to English and back. Spelling variations of the name Connine include Conan, Conane, Conad, Connan, Connant, Conant and others.

Notable amongst the Clan at this time was Sir Arthur Conant; and Rev. John Conant D.D. (1608-1694), an English clergyman, theologian, and Vice-Chancellor of Oxford University. He was the "son of Robert and Elizabeth...
Another 34 words (2 lines of text) are included under the topic Early Connine Notables in all our PDF Extended History products and printed products wherever possible.

Migration of the Connine family to Ireland

Some of the Connine family moved to Ireland, but this topic is not covered in this excerpt. More information about their life in Ireland is included in all our PDF Extended History products and printed products wherever possible.

Migration of the Connine family

Scots left their country by the thousands to travel to Australia and North America. Desperate for freedom and an opportunity to fend for themselves, many paid huge fees and suffered under terrible conditions on long voyages. Still, for those who made the trip, freedom and opportunity awaited. In North America, many fought their old English oppressors in the American War of Independence. In recent years, Scottish heritage has been an increasingly important topic, as Clan societies and other organizations have renewed people's interest in their history. An examination of passenger and immigration lists shows many early settlers bearing the name of Connine: Christopher Conant who settled in Plymouth Massachusetts in 1623; as did Roger and his wife in the same year; Roger Conant and his wife settled in Maine in 1623.