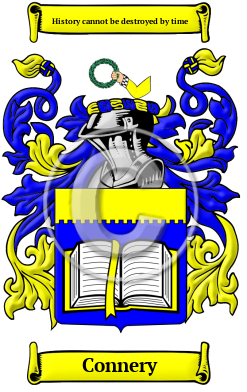 The name Connery has changed considerably in the time that has passed since its genesis. It originally appeared in Gaelic as O Maolconaire, denoting a descendant of the follower of Conaire. However, this was not the only Gaelic name Anglicized Conroy; others were O Conraoi, Mac Conraoi, O Conaire, and O Conratha.

Early Origins of the Connery family

The surname Connery was first found in around Galway Bay, where counties Galway and Clare meet. The Conroys first settled in Lough Corrib and Lough Lurgan, the ancient names of two lakes which now constitute Galway Bay. In modern times, Conrys are also common in Leix and Offaly. There were several different septs whose Gaelic names were Anglicized as Conroy, the most important of which was O Maolconaire.

They held a family seat in the parish of Clooncraff, near Strokestown in the county of Roscommon. They used the Anglicized form O'Mulconry, which was later shortened to Conry, and were distinguished as hereditary poets and historians to the kings of Connacht. One of the most significant members of this sept was Fearfasa O'Mulconry, who, with three of the O'Clerys, compiled the "Annals of the Four Masters" in 1636.

Also belonging to this sept was Maurice O'Mulconry, who completed a magnificent copy of the Book of Fenagh in 1517. Other septs who took the name Conroy included the O Conraoisept of Ui Maine, occupying territory in east Galway and south Roscommon, and also the Mac Conraoisept of Moycullen, who were found near the lakes of Lough Corrib and Lough Lurgan, now the Bay of Galway.

The surname King was often erroneously used during the late 17th and 18th century as an Anglicized form of several of these names, due to the similarity in sound between them and the Gaelic words Mac an Righ, which means 'son of the King.' This was particularly true among the MacConroys of Moycullen, who changed the name of their ancestral seat from Ballymaconry to Kingstown.

Early History of the Connery family

Individual scribes in the Ireland during the Middle Ages would often record a person's name various ways. How the name was recorded depended on what that particular scribe believed the proper spelling for the name pronounced to him was. Spelling variations revealed in the search for the origin of the Connery family name include Conroy, Conry, Conray, Conrey, O'Conroy, O'Conry, Connery, Conneray, Conneroy, Connroy, Connry and many more.

Notable amongst the family name at this time was Most Rev. Florence Conry (1561-1620), Archbishop of Tuam. His name in Irish is Flathri O'Moelchonaire, and he was a native of Connaught. "After receiving a suitable education in Spain and the Netherlands he became a Franciscan friar of the Strict Observance at Salamanca, and he was for some time provincial of his order in Ireland (Sbaralea, Supplementum et Castigafio, p. 238). He was commanded by Clement VIII to return to his native country, to assist by his counsels the army which Philip II had sent to Ireland in support of the rebellious...
Another 176 words (13 lines of text) are included under the topic Early Connery Notables in all our PDF Extended History products and printed products wherever possible.

In the United States, the name Connery is the 17,822nd most popular surname with an estimated 2,487 people with that name. [1]

Connery migration to the United States +

Irish families began to immigrate to British North America and the United States in the 18th century, but the greatest influx of Irish immigrants came during the Great Potato Famine of the late 1840s. The earlier settlers came to North America after a great deal of consideration and by paying relatively high fees for their passage. These settlers were primarily drawn by the promise of land. Those later settlers that came during the 1840's were trying to escape the conditions of poverty, starvation, disease, and death that had stricken Ireland. Due to the enormity of their numbers and the late date of their arrival, these immigrants primarily became hired laborers instead of homesteading settlers like their predecessors. An exhaustive search of immigration and passenger lists has revealed many Irish immigrants North America bearing the name Connery:

Connery Settlers in United States in the 17th Century

Connery Settlers in United States in the 19th Century

Connery Settlers in Canada in the 19th Century

Connery Settlers in Australia in the 19th Century

Connery Settlers in New Zealand in the 19th Century