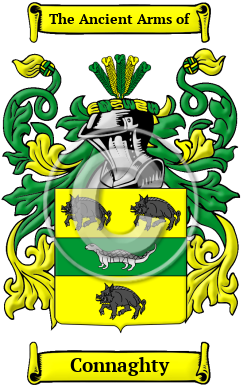 The original Gaelic form of the name Connaghty is Óconnachtaigh. This name can be considered a place name as it indicates that its original bearer inhabited Connaught. The prefix O, meaning '"grandson of" indicates descent from the original bearer.

Early Origins of the Connaghty family

The surname Connaghty was first found in County Donegal with the MacSweenys. That name is derived from Suibhne O'Neill, who was a chieftain in Argyll, Scotland. His descendants migrated to Ireland as gallowglasses (mercenaries) prior to 1267. The three great septs of this name finally established themselves in Tirconnell in 14th century; they were known as MacSweeney Fanad, MacSweeney Banagh, and MacSweeney na dTuath, who were commonly referred to as 'MacSweeney of the Battleaxes.'

Early History of the Connaghty family

This web page shows only a small excerpt of our Connaghty research. Another 182 words (13 lines of text) covering the years 189 and 1893 are included under the topic Early Connaghty History in all our PDF Extended History products and printed products wherever possible.

Names during the Middle Ages were often recorded under several different spelling variations during the life of their bearers. Literacy was rare at that time and so how a person's name was recorded was decided by the individual scribe. Variations of the name Connaghty include Conaty, O'Conaty, Connaghty, Connoty, MacConaghy, MacConkey and many more.

More information is included under the topic Early Connaghty Notables in all our PDF Extended History products and printed products wherever possible.

Migration of the Connaghty family

Irish families began to immigrate to British North America and the United States in the 18th century, but the greatest influx of Irish immigrants came during the Great Potato Famine of the late 1840s. The earlier settlers came to North America after a great deal of consideration and by paying relatively high fees for their passage. These settlers were primarily drawn by the promise of land. Those later settlers that came during the 1840's were trying to escape the conditions of poverty, starvation, disease, and death that had stricken Ireland. Due to the enormity of their numbers and the late date of their arrival, these immigrants primarily became hired laborers instead of homesteading settlers like their predecessors. An exhaustive search of immigration and passenger lists has revealed many Irish immigrants North America bearing the name Connaghty: John McConaghty, age 26, who arrived in Quebec in 1834; Alexander McConaghy, who settled in Allegheny County, Pa. in 1844; Jas MacConnaghy, who arrived in New York City in 1811.