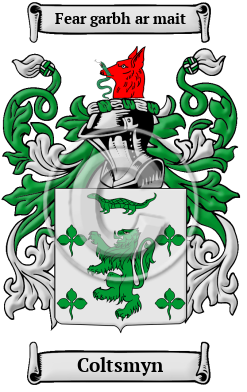 The name Coltsmyn has changed considerably in the time that has passed since its genesis. It originally appeared in Gaelic as Mag Fhearadhaigh, derived from the word "fearadhach," possibly meaning "manly." [1]

Early Origins of the Coltsmyn family

The surname Coltsmyn was first found in Connacht (Irish: Connachta, (land of the) descendants of Conn), where they held a family seat from ancient times. [2]

Over in Devon, England, "The ' Domesday ' manor of Kari, in the parish of St. Giles-in-the-Heath, was the first recorded seat of the Gary family ; and one branch continued to reside there so late as the reign of Elizabeth. As early, however, as the reign of Richard II. it ceased to be their principal home. Sir William Gary then settled at Clovelly, and his brother Sir John, Chief Baron of the Exchequer, acquired, with many other manors, that of Cockington, only to lose them all by deciding for Richard against the Commissioners. His attainder was reversed in favour of his son Robert, who gained the favour of Henry V. by vanquishing an Aragonese knight in Smithfield. Two generations later the family were again in difficulty. Sir William Gary, grandson of Robert, was an ardent Lancastrian ; and one of those who, after the fatal battle of Tewkesbury, took refuge in the Abbey Church. Two days later the refugees were treacherously beheaded. The usual forfeiture followed; but Sir William's eldest son, Robert, obtained restoration from Henry VII. He was the ancestor of the present stock of Devonshire Carys. From his half-brother spring the ennobled Carys, represented by Lord Falkland." [3]

Early History of the Coltsmyn family

This web page shows only a small excerpt of our Coltsmyn research. Another 79 words (6 lines of text) covering the years 1585, 1667 and 1668 are included under the topic Early Coltsmyn History in all our PDF Extended History products and printed products wherever possible.

Names written in official documents were generally spelt as they sounded, leading to the problem of one name being recorded under several different variations, creating the illusion in records of more than one person. Among the many spelling variations of the surname Coltsmyn that are preserved in documents of the family history are Garry, Garrihy, Hare, O'Hare, O'Heihir, MacGarry and many more.

Another 32 words (2 lines of text) are included under the topic Early Coltsmyn Notables in all our PDF Extended History products and printed products wherever possible.

Migration of the Coltsmyn family

Irish families began to immigrate to British North America and the United States in the 18th century, but the greatest influx of Irish immigrants came during the Great Potato Famine of the late 1840s. The earlier settlers came to North America after a great deal of consideration and by paying relatively high fees for their passage. These settlers were primarily drawn by the promise of land. Those later settlers that came during the 1840's were trying to escape the conditions of poverty, starvation, disease, and death that had stricken Ireland. Due to the enormity of their numbers and the late date of their arrival, these immigrants primarily became hired laborers instead of homesteading settlers like their predecessors. An exhaustive search of immigration and passenger lists has revealed many Irish immigrants North America bearing the name Coltsmyn: Henry Garry who settled in Virginia in 1635; Claud Garry, who settled with his wife in Virginia in 1714; Barbason O'Hare, who arrived in Boston in 1770.