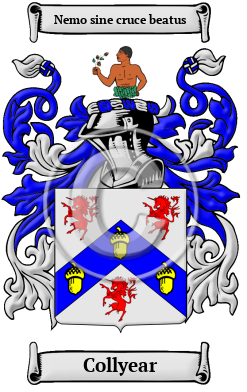 The Collyear name was coined by the Anglo-Saxon tribes of Britain. Collyear was originally a name given to someone who worked as a person who made or sold charcoal. The surname Collyear is derived from the Old English word col, which means coal; as such it is thought to have originally been an occupational name for a burner of charcoal or a gatherer or seller of coal. [1]

Early Origins of the Collyear family

The surname Collyear was first found in Lancashire where one of the first records of the name was Ranulf Colier listed there in 1150. A few years later, Bernard le Coliere was listed in the Pipe Rolls of Somerset in 1172. [1] The Hundredorum Rolls of 1273 revealed: Henry le Colyer in Buckinghamshire; Robert le Coliere in Bedfordshire; and Thomas le Colier in Huntingdonshire. Over one hundred years later, the Yorkshire Poll Tax Rolls list: Adam Colier; and Benedictus Colier. [2]

Early History of the Collyear family

It is only in the last few hundred years that the English language has been standardized. For that reason, early Anglo-Saxon surnames like Collyear are characterized by many spelling variations. As the English language changed and incorporated elements of other European languages, even literate people changed the spelling of their names. The variations of the name Collyear include: Collier, Collyer, Colier, Colyer, Colyar, Colyear and many more.

Notables of the family at this time include Sir Alexander Colyear (d. circa 1685), who was made the 1st Baronet Colyear of Holland in 1677; Giles Collier (1622-1678), an English divine; and David Colyear (c.1656-1730), who was created 1st Earl of Portmore in 1699. Arthur Collier (1680-1732), was an English philosopher and "metaphysician, born 12 Oct. 1680 at Langford Magna, Wiltshire, a family living which had been held by his great-grandfather. His grandfather, Henry Collier, succeeded and was ejected under the Commonwealth. Two of Henry Collier's sons were transported to Jamaica for their share in Penruddocke's rising at Salisbury. " [3] Jeremy Collier...
Another 123 words (9 lines of text) are included under the topic Early Collyear Notables in all our PDF Extended History products and printed products wherever possible.

Migration of the Collyear family to Ireland

Some of the Collyear family moved to Ireland, but this topic is not covered in this excerpt.
Another 30 words (2 lines of text) about their life in Ireland is included in all our PDF Extended History products and printed products wherever possible.

Migration of the Collyear family

Many English families tired of political and religious strife left Britain for the new colonies in North America. Although the trip itself offered no relief - conditions on the ships were extremely cramped, and many travelers arrived diseased, starving, and destitute - these immigrants believed the opportunities that awaited them were worth the risks. Once in the colonies, many of the families did indeed prosper and, in turn, made significant contributions to the culture and economies of the growing colonies. An inquiry into the early roots of North American families has revealed a number of immigrants bearing the name Collyear or a variant listed above: William Collier who settled in Duxbury in 1633; Thomas Collier settled in Hingham Massachusetts in 1635; John Coller, who came to Maryland in 1653; Jeremiah Coller, who settled in Maryland in 1660.