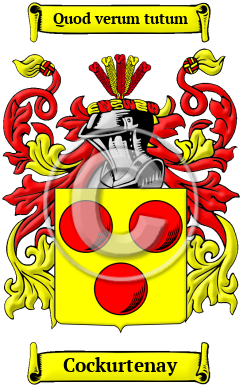 When the ancestors of the Cockurtenay family emigrated to England following the Norman Conquest in 1066 they brought their family name with them. They lived in Devon. The name, however, is a reference one of two areas bearing the name Courtenay in Normandy. The names of both of these areas derive from the Gallo-Roman landlord, Curtenus. [1]

Early Origins of the Cockurtenay family

The surname Cockurtenay was first found in the Gâtinais province of France, where they held the castle of Courtenay since the 10th century. They claim descent from the Counts of Sens and from Pharamond, reputed founder of the French monarchy in 420. However, historians have only been able to prove the line back to about the year 1020, in the Isles of France where they were descended from the great Emperor Charlemagne. The name was established by this trace only to the year 790. [1]

Early History of the Cockurtenay family

Spelling variations in names were a common occurrence in the eras before English spelling was standardized a few hundred years ago. In the Middle Ages, even the literate regularly changed the spellings of their names as the English language incorporated elements of French, Latin, and other European languages. Many variations of the name Cockurtenay have been found, including Courtenay, Courtney, Courtnay, Courteney, Courtny and many more.

Outstanding amongst the family at this time was Renaud de Courtenay (1125-1194), English nobleman from Sutton, Berkshire, progenitor of the Devon line; Sir Hugh de Courtenay (1303-1377), the 2nd Earl of Devon; and Sir Peter Courtenay (1346-1405), soldier, knight of the shire, Chamberlain to King Richard II (1377-1399), famous jouster, received the honour of knighthood from the Black Prince after the Battle of Najera in 1367, at the same time as his brother Sir Philip, 1378 on a naval expedition with his brother Sir Philip, the fleet was attacked by Spaniards off the coast of Brittany and Sir Peter and his...
Another 240 words (17 lines of text) are included under the topic Early Cockurtenay Notables in all our PDF Extended History products and printed products wherever possible.

Migration of the Cockurtenay family to Ireland

Some of the Cockurtenay family moved to Ireland, but this topic is not covered in this excerpt.
Another 57 words (4 lines of text) about their life in Ireland is included in all our PDF Extended History products and printed products wherever possible.

Migration of the Cockurtenay family

For many English families, the social climate in England was oppressive and lacked opportunity for change. For such families, the shores of Ireland, Australia, and the New World beckoned. They left their homeland at great expense in ships that were overcrowded and full of disease. Many arrived after the long voyage sick, starving, and without a penny. But even those were greeted with greater opportunity than they could have experienced back home. Numerous English settlers who arrived in the United States and Canada at this time went on to make important contributions to the developing cultures of those countries. Many of those families went on to make significant contributions to the rapidly developing colonies in which they settled. Early North American records indicate many people bearing the name Cockurtenay were among those contributors: Hercules and Francis Courtenay settled in Philadelphia, Pennsylvania in 1769 and 1771 respectively; John Courtenay settled in Boston Massachusetts in 1819.