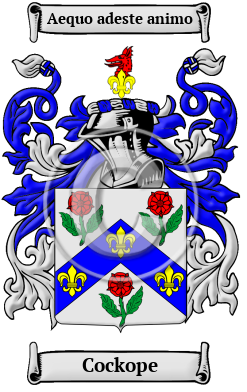 Early Origins of the Cockope family

The surname Cockope was first found in Northamptonshire and Buckinghamshire where the family "appear in the character of civil servants of the crown in the reign of Richard II and Henry IV, and were rewarded with large grants of land." [1] The held family seats at Hardwick and Hanwell, both in the neighbourhood of Banbury. [1]

Another source claims "Staffordshire is the home of the Copes, who are most numerous in the district of Stoke - on - Trent. In the reign of Charles II., Jonathan Cope, of Rauton Abbey, was High Sheriff for the county. The name is also represented in Cheshire and Derbyshire. The ancestors of the line of baronets of this name seem to hail originally from Oxfordshire. In the 13th century the name was established in Bucks, Beds, London, Suffolk, Norfolk, Lincolnshire." [2]

Early History of the Cockope family

Cockope has been spelled many different ways. Before English spelling became standardized over the last few hundred years, spelling variations in names were a common occurrence. As the English language changed in the Middle Ages, absorbing pieces of Latin and French, as well as other languages, the spelling of people's names also changed considerably, even over a single lifetime. Many variations of the name Cockope have been found, including Cope, Coap, Coape, Copes and others.

Distinguished members of the family include Alan Cope (d. 1578), English Catholic divine, "a native of the city of London. He was educated at Oxford, and after taking the degree of B.A. was made perpetual fellow of Magdalen College in 1549. " [3] Sir Anthony Cope (d. 1551), was an early English author, second son of William Cope of Hanwell, Oxfordshire, cofferer to Henry VII, by his second wife Joan, daughter of John Spencer of Hodnell, Warwickshire, was a member of Oriel College, Oxford, but does not appear to have graduated. [3] Michael Cope (fl. 1557), was a Protestant author who fled from...
Another 101 words (7 lines of text) are included under the topic Early Cockope Notables in all our PDF Extended History products and printed products wherever possible.

Migration of the Cockope family to Ireland

Some of the Cockope family moved to Ireland, but this topic is not covered in this excerpt.
Another 46 words (3 lines of text) about their life in Ireland is included in all our PDF Extended History products and printed products wherever possible.

Migration of the Cockope family

In an attempt to escape the chaos experienced in England, many English families boarded overcrowded and diseased ships sailing for the shores of North America and other British colonies. Those families hardy enough, and lucky enough, to make the passage intact were rewarded with land and a social environment less prone to religious and political persecution. Many of these families became important contributors to the young colonies in which they settled. Early immigration and passenger lists have documented some of the first Cockopes to arrive on North American shores: Edward Cope who settled in Rhode Island whose sons Richard and William became noted shoemakers of Boston; Giles Cope who settled in Virginia in 1654; William Cope settled in Barbados in 1680.