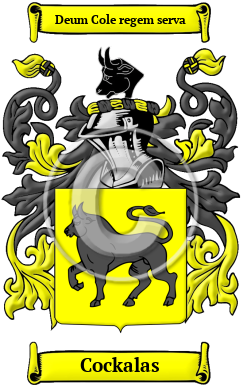 The proud Cockalas family originated in Cornwall, a rugged coastal region in southwestern England. In early times, people were known by only a single name. However, as the population grew and people traveled further afield, it became increasingly necessary to assume an additional name to differentiate between bearers of the same personal name. The manner in which hereditary surnames arose is interesting. Local surnames are derived from where the original bearer lived, was born, or held land. The Cockalas family originally lived in south west England. Their name, however, is derived from the Old English word coll, which means hill, and indicates that the original bearer lived near such a land form.

Early Origins of the Cockalas family

The surname Cockalas was first found in south west England. "Essentially south of England names, especially in the south - west, rarely occurring north of a line drawn west from the Wash. Cole is best distributed and has its principal homes in Devon and Wiltshire. Coles is most numerous in Somerset. " [6]

Early History of the Cockalas family

Migration of the Cockalas family to Ireland

Some of the Cockalas family moved to Ireland, but this topic is not covered in this excerpt.
Another 47 words (3 lines of text) about their life in Ireland is included in all our PDF Extended History products and printed products wherever possible.

Migration of the Cockalas family

In the immigration and passenger lists a number of early immigrants bearing the name Cockalas were found: Robert Coles who settled in Warwick coming with Winthrop's Fleet to Ipwich Massachusetts in 1630.