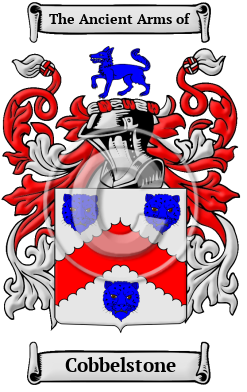 Early Origins of the Cobbelstone family

The surname Cobbelstone was first found in Devon at Coplestone (Copelstan.) "From the Copelanstan these three hides afterwards took name, and they were granted, as an endorsement on the original charter certifies, by the venerable priest Brihtric to the minster of Crediton, some time before the Norman Conquest. At an unknown but very early period, however, the estate passed into the hands of one of the oldest of Devonshire families, who thence took name, and who proudly held themselves to be descended from an English ancestor who kept his lands through the Conquest, the ancient rhyme running :

Early History of the Cobbelstone family

This web page shows only a small excerpt of our Cobbelstone research. Another 100 words (7 lines of text) covering the years 1359, 1607, 1642, 1655 and 1655 are included under the topic Early Cobbelstone History in all our PDF Extended History products and printed products wherever possible.

More information is included under the topic Early Cobbelstone Notables in all our PDF Extended History products and printed products wherever possible.

Migration of the Cobbelstone family