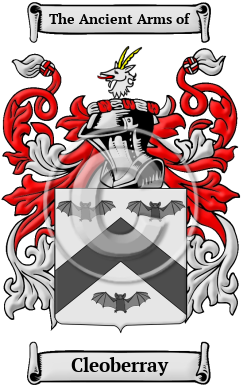 Early Origins of the Cleoberray family

The surname Cleoberray was first found in Devon where they held a family seat at Bradston (Bradstone.)

Early History of the Cleoberray family

Distinguished members of the family include the Clobery family of Devon; Sir John Cloberry (c. 1625-1688), an English soldier and politician, Member of Parliament for Launceston and Hedon in 1660; Sir John Cloberry (circa 1620-1687), Aide-de-camp...
Another 35 words (2 lines of text) are included under the topic Early Cleoberray Notables in all our PDF Extended History products and printed products wherever possible.

Migration of the Cleoberray family