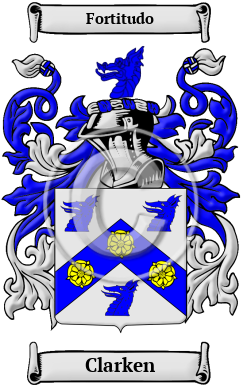 Clarken is an Anglo-Saxon name. The name was originally given to a person who concerned himself with matters of scholarly importance or of religious orders or as a secretary. The surname Clarken originally derived from the Latin form clericus. Even today, the word and profession clerk is typically pronounced clark throughout the United Kingdom.

The name may have been Norman in origin, having descended from the name Le Clerc and generally means "a learned person-that is, one who could in old times read and write-accomplishments. " [1]

Indeed, the name was seen in early rolls in both Normandy and England. "Twenty of the name occur in 1198; of these, nine also occur in England 1199; and the families of the name generally seem to have had members in both countries." [2]

Early Origins of the Clarken family

"Absent in Wales, and scarce in most of the counties on the Welsh border. Best represented in Buckinghamshire, Essex, Leicestershire, Rutlandshire, and Nottinghamshire. " [4]

"As a surname, Clarke appears frequently to have aliased some other appellative; for instance the Baronet family, Clarke of Salford, originally Woodchurch, from the parish of that name in Kent, soon after the Conquest became Clarkes (Le Clerc) in consequence of a marriage with an heiress, and the family for some generations wrote themselves "Woodchurch alias Le Clerc," and vice versa." [1]

Yet just over one hundred years later, the "Le" prefix was dropped and the Latin form of the name was deprecated as seen in the Yorkshire Poll Tax Rolls of 1379 which listed: Robertus Clarke; Beatrix Clerc; and Henricus Clerk. [5]

Early History of the Clarken family

One relatively recent invention that did much to standardize English spelling was the printing press. However, before its invention even the most literate people recorded their names according to sound rather than spelling. The spelling variations under which the name Clarken has appeared include Clark, Clerk and others.

Distinguished members of the family include Sir James Clark, a physician to the King; Samuel Clarke (1599-1683), an English clergyman and significant Puritan biographer; William Clerk, LL.D...
Another 26 words (2 lines of text) are included under the topic Early Clarken Notables in all our PDF Extended History products and printed products wherever possible.

Migration of the Clarken family to Ireland

Some of the Clarken family moved to Ireland, but this topic is not covered in this excerpt.
Another 107 words (8 lines of text) about their life in Ireland is included in all our PDF Extended History products and printed products wherever possible.

Clarken migration to the United States +

At this time, the shores of the New World beckoned many English families that felt that the social climate in England was oppressive and lacked opportunity for change. Thousands left England at great expense in ships that were overcrowded and full of disease. A great portion of these settlers never survived the journey and even a greater number arrived sick, starving, and without a penny. The survivors, however, were often greeted with greater opportunity than they could have experienced back home. These English settlers made significant contributions to those colonies that would eventually become the United States and Canada. An examination of early immigration records and passenger ship lists revealed that people bearing the name Clarken arrived in North America very early:

Clarken Settlers in United States in the 19th Century

Clarken Settlers in New Zealand in the 19th Century