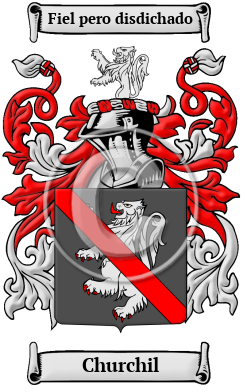 The name Churchil arrived in England after the Norman Conquest of 1066. The Churchil family lived in Somerset in the town of Curcelle. The name Curcelle is of Norman origin, but once in England became confused with name Churchill, which derives from the Old English cyrice, which means church, and hyll, which means hill. The histories of the two names are now inextricably linked.

"The Churchills of Dorset, ancestors of the great Duke of Marlborough, are traceable, by the ordinary heralds' pedigrees, to the reign of Henry VII., bearing a lion rampant, debruised by a bendlet. Prior to this, they were of Devon and Somerset, still bearing the same arms. The Churchills of Devon descended from Elias de Chirchille, temp. Edward I. who married the heiress of Widworthy." [1]

Early Origins of the Churchil family

The surname Churchil was first found in Somerset where one of the first records of the name was Richard de Churchulle who was listed there in the Hundredorum Rolls of 1273. During King Edward III's reign (1327-1377), Nicolas de Churchhull was also listed as holding lands there. [2]

Another source claims "the distinguished Dorset family of Churchill, whence sprang the Duke of Marlborough, resided at Mintern in the 16th and 17th centuries." [3] And another claims "Roger de Corcelles [was] a great Domesday tenant in the western counties, the ancestor of the Dukes of Marlborough. Churchill has, however, a sufficiently English aspect, and as we find four parishes in different counties so called, we need hardly seek for a Norman origin." [4]

This latter quote needs some explanation. The author (Mark Anthony Lower) argues that while yet another source claims the name to be Norman in origin, he feels that the name is presumably Anglo-Saxon in origin. To us, the lion's share of sources claim that the family is of Norman origin and we agree.

Early History of the Churchil family

A multitude of spelling variations characterize Norman surnames. Many variations occurred because Old and Middle English lacked any definite spelling rules. The introduction of Norman French to England also had a pronounced effect, as did the court languages of Latin and French. Therefore, one person was often referred to by several different spellings in a single lifetime. The various spellings include Churchill, Churchell and others.

Outstanding amongst the family at this time was Sir Winston Churchill FRS (1620-1688), known as the Cavalier Colonel, an English soldier, historian, and politician, ancestor of his 20th-century namesake, Prime Minister Sir Winston Churchill; John Churchill (1622-1682), an English politician, Member of Parliament for Dorchester...
Another 45 words (3 lines of text) are included under the topic Early Churchil Notables in all our PDF Extended History products and printed products wherever possible.

Many English families left England, to avoid the chaos of their homeland and migrated to the many British colonies abroad. Although the conditions on the ships were extremely cramped, and some travelers arrived diseased, starving, and destitute, once in the colonies, many of the families prospered and made valuable contributions to the cultures of what would become the United States and Canada. Research into the origins of individual families in North America has revealed records of the immigration of a number of people bearing the name Churchil or a variant listed above:

Churchil Settlers in Canada in the 18th Century