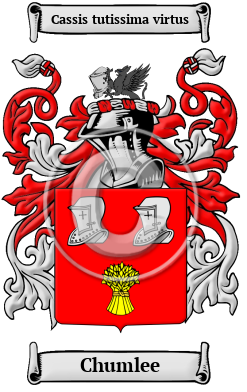 The name Chumlee was brought to England by the Normans when they conquered the country in 1066. The ancestors of the Chumlee family lived in the township of Cholmondley in the parish of Malpas in Cheshire. The name is traditionally pronounced Chumley.

Early Origins of the Chumlee family

The surname Chumlee was first found in Cheshire at Cholmondeley, a civil parish and village where they were "descended from the Barons of Malpas, and directly from Robert de Cholmondelegh, second son of William Belward, lord of a moiety of the Barony of Malpas, and younger brother of David the ancestor of the Egertons; which Robert was seated at Cholmondeley in the reign of King John." [1]

The parish of Delemere in Cheshire was home to a distinguished branch of the family. "On its inclosure it gave the title of Baron Delamere, of Vale Royal, to Thomas Cholmondeley, Esq., the proprietor of the ancient possessions of the Cistercian monks of Vale Royal, whose sumptuous abbey, completed in 1330 by Edward III., at a cost of £32,000, was dedicated to the Lord Jesus Christ, the Virgin Mary, St. Nicholas, and St. Nichasius, and in the 26th of Henry VIII." [2]

Early History of the Chumlee family

The English language only became standardized in the last few centuries. For that reason, spelling variations are common among many Anglo-Norman names. The shape of the English language was frequently changed with the introduction of elements of Norman French, Latin, and other European languages; even the spelling of literate people's names were subsequently modified. Chumlee has been recorded under many different variations, including Chumley, Cholmondeley, Chamandy, Cholemley, Cholmeley, Cholmle, Cholmley and many more.

Outstanding amongst the family at this time was Richard Cholmondeley (1460-1521), English farmer and soldier, who served as Lieutenant of the Tower of London; Robert Cholmondeley (1584-1659), created 1st Viscount Cholmondeley in 1628 and became 1st Earl of Leinster (Ireland) and Baron Cholmondeley (England) in 1645, Chief Justice of England in 1552-1553; Sir Hugh Cholmeley (Cholmley) (1600-1657) 1st Baronet, an English landowner, Member of Parliament for Scarborough (1624-1629) and (1640-1643), initially a Parliamentarian but...
Another 73 words (5 lines of text) are included under the topic Early Chumlee Notables in all our PDF Extended History products and printed products wherever possible.

Migration of the Chumlee family to Ireland

Some of the Chumlee family moved to Ireland, but this topic is not covered in this excerpt.
Another 35 words (2 lines of text) about their life in Ireland is included in all our PDF Extended History products and printed products wherever possible.

Migration of the Chumlee family

To escape the uncertainty of the political and religious uncertainty found in England, many English families boarded ships at great expense to sail for the colonies held by Britain. The passages were expensive, though, and the boats were unsafe, overcrowded, and ridden with disease. Those who were hardy and lucky enough to make the passage intact were rewarded with land, opportunity, and social environment less prone to religious and political persecution. Many of these families went on to be important contributors to the young nations of Canada and the United States where they settled. Chumlees were some of the first of the immigrants to arrive in North America: Margaret Cholmondely who settled in New England in 1705; Joab Cholmley settled in Jamaica in 1684; Robert Cholmle settled in Virginia in 1623.