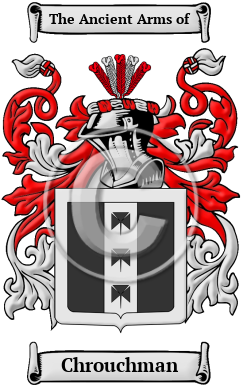 The Anglo-Saxon name Chrouchman comes from when the family resided near a crossroads. The name is derived from the Old English word crouch, and/or cruc.

Early Origins of the Chrouchman family

The surname Chrouchman was first found in Somerset where John atte Crouche was the first listing of the family 1, Edward III (during the first year of the reign of King Edward III.) [1]

"This surname is derived from a geographical locality. 'at the cross,' i.e. the roadside or market-cross, once so familiar a sight at the intersection of the great country thoroughfares, or in the chartered market-steads. Crouch still lingers in our 'crutched' or 'crouched friars.' Langland describes a pilgrim as having 'many a crouch' embroidered 'on his cloke.' Blomefield says of an old Norwich church, 'St. Crowche's was dedicated in honour of the Invention of the Holy Cross, but is now totally demolished; the churchyard is still surrounded with common lanes or passages'." [3]

The word crouch "was applied in general to such crosses as stood at the intersection of two roads and although they have long disappeared, they have left the name of 'cross' and 'crouch' upon many localities, especially in the South of England. In Sussex, where the name is one of the oldest indigenous designations (especially in the Cinque Ports) it is found in the forms of Crouch and De Cruce, 20 Edw. I." [4]

In Scotland, the name was derived "from a residence at or near a roadside cross or crucifix, ME. crouche. The surname is more English than Scottish. Johannes Crooch witnessed a confirmation charter by Alexander Cumyn, earl of Buchan, to the canons of St. Andrews. John Cruche was burgess of the Canongate, Edinburgh, 1567." [5]

Early History of the Chrouchman family

The English language only became standardized in the last few centuries; therefore,spelling variations are common among early Anglo-Saxon names. As the form of the English language changed, even the spelling of literate people's names evolved. Chrouchman has been recorded under many different variations, including Crouch, Crooch, Croucher, Croutch, Crowch, Crowcher, Crouche and many more.

Notables of this surname at this time include: Thomas Crouch (1607-1679), an English academic and politician who sat in the House of Commons from 1660 to 1679. Humphrey Crouch or Crowch (fl. 1635-1671), was an English ballad-writer and pamphleteer, probably belonged to the family of publishers named Crouch, who traded largely in popular literature in the seventeenth and eighteenth centuries. "Mr. Halliwell-Phillipps has suggested that Humphrey was brother of John Crouch, the Royalist verse-writer. It is equally likely that he stood in the same relation to Edward Crouch or Crowch, John Crouch's publisher, and that he was father or uncle of Nathaniel...
Another 310 words (22 lines of text) are included under the topic Early Chrouchman Notables in all our PDF Extended History products and printed products wherever possible.

Migration of the Chrouchman family

For many English families, the political and religious disarray that shrouded England made the far away New World an attractive prospect. On cramped disease-ridden ships, thousands migrated to those British colonies that would eventually become Canada and the United States. Those hardy settlers that survived the journey often went on to make important contributions to the emerging nations in which they landed. Analysis of immigration records indicates that some of the first North American immigrants bore the name Chrouchman or a variant listed above: Richard, Nicholas, Richard, and Thomas Crouch who settled in Virginia in 1623; followed by Eliza in 1653; William Crouch settled in Charlestown in 1654.