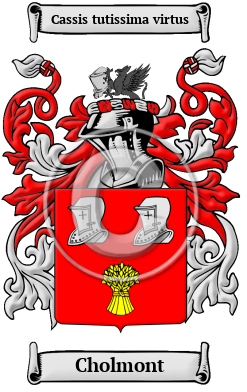 The history of the Cholmont family name begins after the Norman Conquest of 1066. They lived in the township of Cholmondley in the parish of Malpas in Cheshire. The name is traditionally pronounced Chumley.

Early Origins of the Cholmont family

The surname Cholmont was first found in Cheshire at Cholmondeley, a civil parish and village where they were "descended from the Barons of Malpas, and directly from Robert de Cholmondelegh, second son of William Belward, lord of a moiety of the Barony of Malpas, and younger brother of David the ancestor of the Egertons; which Robert was seated at Cholmondeley in the reign of King John." [1]

The parish of Delemere in Cheshire was home to a distinguished branch of the family. "On its inclosure it gave the title of Baron Delamere, of Vale Royal, to Thomas Cholmondeley, Esq., the proprietor of the ancient possessions of the Cistercian monks of Vale Royal, whose sumptuous abbey, completed in 1330 by Edward III., at a cost of £32,000, was dedicated to the Lord Jesus Christ, the Virgin Mary, St. Nicholas, and St. Nichasius, and in the 26th of Henry VIII." [2]

Early History of the Cholmont family

Before the advent of the printing press and the first dictionaries, the English language was not standardized. Sound was what guided spelling in the Middle Ages, so one person's name was often recorded under several variations during a single lifetime. Spelling variations were common, even among the names of the most literate people. Known variations of the Cholmont family name include Chumley, Cholmondeley, Chamandy, Cholemley, Cholmeley, Cholmle, Cholmley and many more.

Outstanding amongst the family at this time was Richard Cholmondeley (1460-1521), English farmer and soldier, who served as Lieutenant of the Tower of London; Robert Cholmondeley (1584-1659), created 1st Viscount Cholmondeley in 1628 and became 1st Earl of Leinster (Ireland) and Baron Cholmondeley (England) in 1645, Chief Justice of England in 1552-1553; Sir Hugh Cholmeley (Cholmley) (1600-1657) 1st Baronet, an English landowner, Member of Parliament for Scarborough (1624-1629) and (1640-1643), initially a Parliamentarian but...
Another 73 words (5 lines of text) are included under the topic Early Cholmont Notables in all our PDF Extended History products and printed products wherever possible.

Migration of the Cholmont family to Ireland

Some of the Cholmont family moved to Ireland, but this topic is not covered in this excerpt.
Another 35 words (2 lines of text) about their life in Ireland is included in all our PDF Extended History products and printed products wherever possible.

Migration of the Cholmont family

To escape the political and religious chaos of this era, thousands of English families began to migrate to the New World in search of land and freedom from religious and political persecution. The passage was expensive and the ships were dark, crowded, and unsafe; however, those who made the voyage safely were encountered opportunities that were not available to them in their homeland. Many of the families that reached the New World at this time went on to make important contributions to the emerging nations of the United States and Canada. Research into various historical records has revealed some of first members of the Cholmont family to immigrate North America: Margaret Cholmondely who settled in New England in 1705; Joab Cholmley settled in Jamaica in 1684; Robert Cholmle settled in Virginia in 1623.